An adult and a child are turned on by a spanking: what are the odds?

The number of actual beatings is much higher than that. One reason is that only some children get beaten, and they tend to get multiple beatings in the course of a year. The children who get beaten in the US tend to be disproportionately black or Hispanic, or to have a disability. Moreover, having been beaten once is a good predictor of getting beaten again. When the same child is beaten repeatedly, the statistics won’t record that. They only record that that child was beaten at least once.

I’m going to be very conservative, and add 5% to take into account the repeated beatings of one child. So that’s a conservative estimate of 285,600 beatings in public schools. 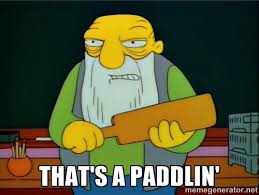 I have to admit that I thought this Simpson’s meme was funny, in context. But it also squicked me a little: there’s nothing funny about beating children

But I’m going to be conservative, again, and assume that they’re only 10% of the schools in the 19 “corporal punishment” states, although in reality they’re likely to be a lot more than that, in those States.

Records aren’t collected for those schools, but all sources agree that private schools carry out far more “corporal punishment” than public schools. So, again being extremely conservative, I’m going to factor in a rate that is only 5% higher than for public schools. That comes to 40,800 child beatings a year in private American schools.

So, taking all that into account, and having used estimates that are likely to substantially understate the true number, we have approximately 326,400 child beatings a year in American schools.

So how many bdsm-sensitive people are involved in school child-beatings?

Applying the 5% rule, that means that in about 16,320 of those cases the teacher or disciplinary officer concerned was turned on, or trying to avoid being turned on, by the “paddling” they were delivering.

By the way, in Texas it’s still legal for a male teacher to “paddle” a female student on her buttocks, and Texas has recently raised its school leaving age to 19.

I know beyond any doubt that if I did “paddle” a 19 year old girl’s ass while she bent over a chair, there would be no way in hell I could avoid reacting sexually to that situation. No matter how hard I tried not to. But I simply couldn’t and wouldn’t do it. It’s pretty much a form of rape.

Unfortunately, an adult such as a teacher can’t just be quietly, internally aroused, so that no one else will pick up on it. An aroused person releases pheromones, which are detected by others in their space, like the person being “paddled” by the aroused person. Even if it isn’t consciously noticed, that release tends to alter the other person’s (the child’s, in this case) interpretation of what’s going on, their reactions to it and their behaviour.

But what about the children?

Still applying the 5% rule, it means that in about 16,320 of those cases the child or young person is interpreting what’s happening sexually, and responding to it sexually.

I’ve punished a reasonable number of submissive women, where the intention was to cause only pain and no pleasure. I’ve learned, therefore, that there is no amount of pain, especially delivered to the buttocks, that can’t be interpreted erotically. That’s especially so when there’s a formal ritual, and the victim is made to present their own body and cooperate. How much it hurts at the time has nothing to do with the body and mind’s reactions.

That’s a total of 32,640 child-beatings a year, in which either the teacher or the child is aware of the “spanking” as a sexual event.

If parents or law-makers are happy with that, then the parents are carelessly ill-advised about the welfare of their children, and the legislators, though they’re going along with public opinion in their States, are being dangerously irresponsible.