All humans have some ability to turn pain and submission, or the giving of pain and the taking of submission, into sex. It’s part of a genetic and behavioural pattern we share with the other homo or pan species.*

It’s got survival and genetic advantages. If you can turn fighting into fucking through a dominance/submission ritual, you’re less likely to get killed or damaged. And having an extra pathway for sex means you’re likely to have more sex and more partners, with better chances of passing on your genes.

Childhood spankings are about the most most blatant of those experiences. 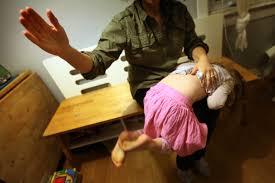 The sexual triggers include being held close to an adult’s sexually mature body, and the way the over-the-knee spanking position places the child’s genitals in close proximity to the adult’s genitals.

The misconduct that provoked the spanking may have been exciting (and may have involved sexual exploration) so that the spanking becomes part of the same excitingly “naughty” experience.

When a child is forced to present his or her bottom (even if clothed) to an adult, as part of the spanking, the child can read this as an indication that this is a “rude” event, allowing them to feel sexual about it. Children are likely to experience an adult’s attention to their buttocks as sexual regardless of the adult’s perception or intentions.

About five per cent of children, or one in twenty, are particularly likely to do so.

Hands across the genus: bonobo and human hand

1 thought on “Some bdsm-related reasons why hitting children is a bad idea 6: Children interpret spanking”