Sal held the wrist of the hand that was stroking her cunt. She said, “please”, again. Then “Master.”

We’d agreed, at dinner, that the word “Master” is meaningless when people say it during play. You can’t be the master of someone you’ve just met. But we’d also agreed that sometimes it sounded sexy anyway. She wanted me happy and flattered, so she could work her way with me. Work her way with my hand, anyway. She tightened her grip on my wrist, and scootched down. A second later, all of my hand was in her except for my thumb.

The speed and ease with which she’d managed that left me open-mouthed. “Stone me. I wouldn’t have thought that was even possible.”

Sal grunted, but didn’t reply. She wasn’t interested in what I would have thought.

Her cunt was tight on my hand, but there was no sense of danger. That is, I wasn’t worried about tearing. I knew, intellectually, that cunts are built to handle the skulls of babies. My hand was bigger than that, but I could flex and scrunch the bones to put as little stress on her as possible, which wasn’t something an emerging baby gave much attention to. It helped that Sal was utterly happy and relaxed.

Some men talk misogynist crap about “loose cunts”, and say vile and nasty things about the women they claim are “slack”. I despise that kind of talk so much that I hate to engage with it even to the extent of saying that it’s ignorant bullshit as well as hateful crap. For the record, Sal’s cunt was like any other, taut, trimmed, petite and pouting. Like all cunts, it had amazing powers of expansion, which is lucky because otherwise we’d be an extinct species. And there I was, with most of my hand in Sal’s. She’d kind of taken my hand.

I was thinking it was extraordinary that I could fit that much of my hand in her, when Sal asked me to tuck my thumb up next to my palm. A couple more pushes from her and a bit of twisting from me, and there I was, with my closed hand in her up to the wrist, fisting Sal. It wasn’t something I’d expected or wanted to do, but it was certainly a new experience. The inside of her cunt was smooth and cool and wet. The muscle felt stretched but, as far as I could tell, not stressed. I could begin to understand why she might like it. 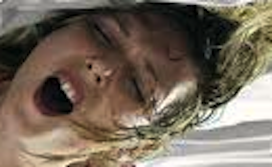 I said, “Fucking hell. On a  unicycle.” Sal nodded and lay back. I used my hand as a piston, moving it backwards and forwards, slowly at first and gradually speeding up. Eventually Sal’s stomach muscles tightened, and she  screamed and writhed. She puffed, eyes wide. She thought she was done.

But I was feeling merciless. I kept going, and we got another, louder orgasm, that finished up in sobs and tears and then silence.

I took my hand out of her, carefully, and stroked her hair off her face. I curled up behind her and reached over to hold her right breast. She was asleep in about a minute.