One thing about schoolgirl spanking stories is that they stay light while actually going into some quite dark emotional and political territory. It’s odd that this scenario has managed to be mostly understood as a light and playful sexual game. It’s a non-consensual scenario. The behaviour of the institution, and the specific  teacher, in that scenario would be horrific, of course, if it were real.

The scenario does everything it can to stress the submissive’s powerlessness. She wears a uniform that’s specifically designed to mark her as not free. She’s not an adult, no matter what her age might be. The school uniform marks her out as a child, regardless of her age in the fantasy scenario, or her real age if she’s playing it with another person. She’s someone under the control of adults and subject to a long list of rules, none of which respect her privacy or her dignity. 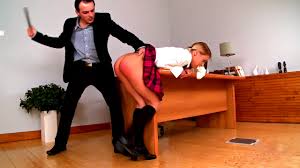 She cannot leave the premises, and her contact with the outside world is controlled by the very people who have assumed the right to beat her and fuck her whenever they feel like it.

It’s the only scenario that goes so dark while still being read as a basically happy and fluffy kind of scene.

If you wanted to have a different fantasy scenario in which the submissive is so controlled without her consent, you’d have to go with something like “Kidnapped! Log Cabin in the Woods”, or “Women’s Prison Farm II: Night of the Warden”.

Which means that we’ll have to look at some of the aspects that people can find troubling (eg the age play element, the non-consent) tomorrow.