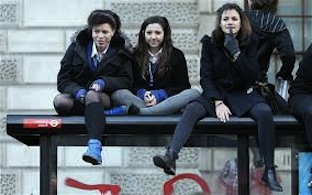 It’s a cold morning. Vicious wind and sheets of rain. There’s a group of schoolgirls in pleated school uniform skirts, waiting for the bus. They’re stamping and rubbing their hands. They’re freezing. A pleated skirt and a blazer over a cotton shirt aren’t nearly enough to keep the cold out.

But the Christian school they go to has a uniform and they have to wear it. They’re not allowed to wear sensible clothes for the weather conditions.

Just behind their bus shelter there’s a strip joint. It closed for the night about four hours ago, a little after three in the morning. But there are enormous paintings on the front of the building to show the punters and pedestrians what you get for your entrance fee, or membership.

So there’s a woman in a nurse’s uniform, leaning forward to show off the considerable heft of her breasts. Because, you know, nurses.

Beside her there’s an equally huge painting of a schoolgirl with an even more improbable body. She’s bending forward to present her arse to the street so the wind can blow her little pleated skirt up and show off her little white knickers, and she’s turning round to gaze at the rosy spectacle of her own arse, giving the viewer a red-lip-sticked O of surprise and a vista of her improbable breasts.

To flash both her ass and her tits that way, she’d have to have her spine made out of the same stuff as Linda Blair’s neck in The Exorcist. If she wasn’t a painting she’d be in traction for years, poor thing.

But they don’t look at it. It’s there.