There’s discussion going on about safe words. It started in Salon and has spilled across various people’s blogs.

Most of the safe word issue seems fairly simple, because safe words don’t go away just because a dom says so. All the stuff about not having safe words is just rhetoric.

I’ve used that rhetoric myself, sometimes. “I’m going to punish you/I’m going to use you, and you don’t have a safe word. I just took it off you. You have no rights at all. I decide where we go and when we stop. Not you.” 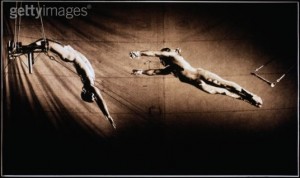 And then we proceed, and I hope it feels hotter for letting her feel we’re trapezing without a net.

But there’s always a safe word, no matter what you say. “Red” is still a safeword, no matter what. “Ok that’s it. Stop right now and undo me, or I’m calling the cops”, and all variations on that, are safewords.  Any dom who carries on past that point is a rapist, an attacker, or both.

Submissive women have told me about experiences with doms who think they have to prove their true domminess by pushing the submissive past the point they can stand. They feel they’ve lost a struggle of wills if they don’t get her to safeword. That seems to me to be more like sports than sex. Sports are boring.

A woman once told me she was having root canal work done, and at a really bad moment she screamed out, “Rumpelstiltskin”.

The dentist just said, “oh, you’re one of those girls, are you?” Then he carried on.