TC (Teresa) Dale wrote, on Twitter, that my rejection of forced sex scenarios was a bit hard-line, and inconsistent with my general principle that writers should be free to write fantasies that wouldn’t really be acceptable in practice. Readers, after all, can tell fantasy from reality, and can scratch itches in fantasy that they can’t in the real world.

It’s a valid point, and it got me thinking more about forced and non-consensual scenes. 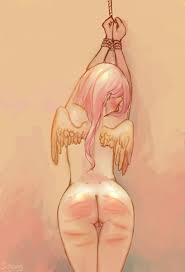 I used the words “on the side of the angels” purely so I could use this image again. It’s by an artist drawing as “Schpog”, and I think it’s gorgeous.

Firstly, there are many stories about non-consenting sex written from the “victim’s” point of view. Those tend to be stories where the aggressor is incredibly hot, and the woman (could be a guy or transgendered person, but usually it’s a a woman) dutifully says no, but finds that the hot aggressive one overrides their objections and forces them into sexual acts anyway. And the “victim” shocks herself by being into it.

And I have no objection to writing that at all.

It’s writing from the other side, the “aggressor’s” side, that troubles me. If someone wrote a story that went, “she let me in after our date, but she didn’t want to fuck me, so I forced her, and she was, like, totally into it”, I’d find that kind of creepy.

I don’t think reading that story would make it more likely that someone will actually commit rape. That’s far too simplistic.

But I’m not going to write that story, partly for personal reasons: I don’t want to spend any time in that headspace.

But also, I hate those “rapist’s POV camera, stalking the woman” scenes on tv and in movies. I don’t want to write the prose equivalent. I guess it’s the idea that rape culture is pervasive enough already, and writers shouldn’t contribute to it.

So it’s writing about non-consent from the aggressor’s point of view that I have reservations about. 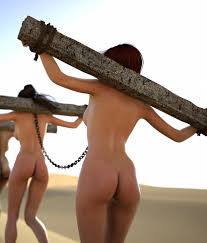 If you have a scenario like, “the auctioneer has to test every slave girl before the auction”, it’s rapey, but somehow less appalling because it’s so obviously fantasy

There’s another issue: realism. It’s one thing to write about a James Bond villain with an underground lair and a desert island, or an alien with a spaceship, kidnapping some woman (or man or trans-gendered person) and forcing her into various sexual scenarios. Somehow that seems like it could be written from the aggressor’s point of view and not trigger my concerns, because it is so obviously fantasy.

Realistic stories seem much creepier. “I raped my girlfriend because she didn’t feel like having sex with me, and then she loved it.” Or: “I stalked her through the park, attacked her, and fucked her on the grass where no one could see us.”

The principle is the same – it’s all forced sex – but it’s “realistic stories of non-consenting sex, from the aggressor’s POV” that make me most uncomfortable. A writer who really was celebrating the way rape happens in the real world would strike me as an asshole.

Finally, this is personal. Part of my discomfort is simply that my persona, and my reality, is very clearly male dom.