Back in the taxi Roland had promised Teresa, into her ear so the driver wouldn’t hear, that her spanking would be the “can’t sit down” kind. 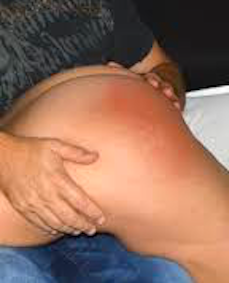 That was probably true, not because of pain but because sitting down would be the last thing she’d want to do when this spanking stopped. If it ever was going to stop. For now she was content to lie over his legs, tightly held, his hand landing over and over on her bare ass.

His hand was warm, comforting as well as mildly painful. Her arse felt glorious: warm, sexy, teased. She was in no hurry for this to stop. Neither was he, it seemed.

But at last he rested his hand on her arse, and she could feel her own heat, and his. She expected her skin was the brightest red colour it had ever been. She’d never felt quite so confident that a man liked what he saw, as she did just then.

He said, “All right, Teresa. That was your lesson: once you’ve started calling a man sir, it’s not safe to brat him. Not without consequences. But you’re done now. Up you get.”

But Teresa was too dazed and too bizarrely comfortable to want to move. 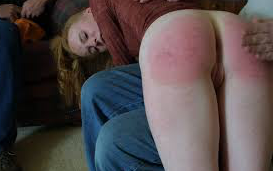 She watched her hair brushing on his carpet, and wondered again what colour her ass was – scarlet? crimson? somewhere around that part of the spectrum – and what it would take to get him to start again. And then, suddenly and treacherously, he pushed her and she tumbled onto that carpet.

She slid her hands under her bottom and squeezed tight, glaring up at him. He only smiled down at her. “Stand up, Teresa, and take your clothes off. All of them.”

Teresa considered defiance. But the spanking part of the evening, though it had been hot, and fun, was over. And undressing was something she’d been meaning to do anyway. So she removed silks and velvet, finally dropping the long skirt he’d pushed up to her waist, and stood facing him in just her corset, feet slightly apart, hands at her sides. 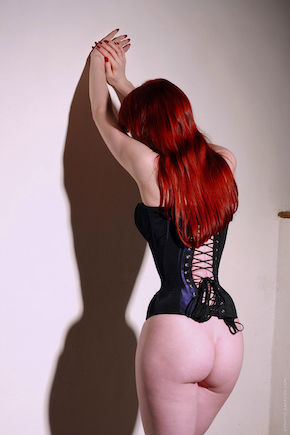 Roland regarded her gravely. He was still seated, still fully dressed. Finally he said, “You are amazingly beautiful. And completely, utterly desirable. I’m going to take that corset off before I fuck you. Because it’s more comfortable for me that way.” He looked her in the eyes.

Debbie decided not to fight on the corset issue. For now. Because when he’d claimed to want it off solely for his own comfort he’d been winding her up, and, she guessed, hoping she’d rise to the challenge. “Yes, sir.” But she didn’t take it off.

So he raised the stakes. “I don’t think I’m going to let you wear clothes in this flat again. From now on, you strip when you get in the door. Understood?”