That last post includes a picture of a grotesque whiskery “schoolmaster” flexing a cane. I mentioned that I thought it was an English music-hall comedian called Jimmy Edwards.

I got the era wrong: apparently he was on British tv in the late 1950s as a corrupt and sadistic headmaster in a series called “Whack-O.” That was a comedy, which is pretty extraordinary.

You could produce a series about that these days, but it’d be about the soul-destroying damage he caused, and the slow process by which the justice system caught up with him. It would end on a bleak note, with the damaged children watching him being pushed into a van, and some hint of the things that had happened to him that ruined his own soul. “Comedy? Are you out of your fucking mind?” 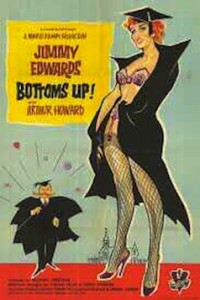 So “Whack-O” will never be re-made. Some things change for the better.

But … he also made a film, called “Bottoms Up!”, apparently a spin-off from the tv show.

I don’t know anything about the film, except that it would have had more sexual jokes – and women – in it than the tv series.