Probably the oddest thing about Jeremy Bentham is that he’s still around, and he attends meetings of the Board of University College, London. 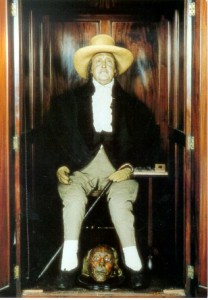 Bentham. That's a wax head on his shoulders, and his real head in a jar at his feet. Don't ask.

When he died on 6 June 1832, he left his entire estate to the University College London. There was just one condition, that they had to enbalm his body, and his body would be brought to the table, to attend every college board meeting.

So his body sits in a wheelchair, most of the time, in a cabinet at the college. But he does attend the meetings. He’s listed on the minutes as “present but not voting.”

Bentham lived alone for a long time, so he managed to get fairly eccentric. I don’t think he believed in life after death, so I don’t think he thought that he’d personally be interested in the meetings. He may have thought that his physical presence would inspire the board members to remember his bequest and be sure to apply his philosophical principles in governing the college.

Or … maybe he just had one of those nineteenth century senses of humour, that seem a little robust by our standards. A friend of mine was at University College, though not on the board, and he says that Bentham’s seemed to be a benign and vaguely comforting presence.