One of Jeremy Bentham’s interests was prison reform. He opposed arbitrary and unfair punishment. He believed that a system that was fair, matched to the crime, and impersonal would be respected by criminals and both be more humane and more effective in rehabilitating them.

So he didn’t have much understanding of actual human beings. The application of some his principles unintentionally made prisons even more nightmarish than they were before.

The treadmill avoided giving prisoners the satisfaction they might get if their hard labour actually achieved something useful. Similarly, the rule that prisoners had to be silent at all times was supposed to allow them to contemplate their faults and focus on improvement, and stop them encouraging each other in criminality. But people can’t function without social contact. It drove many prisoners mad. 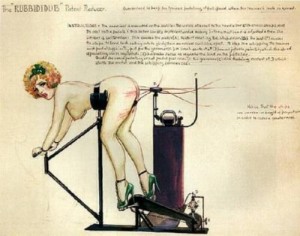 The offender is secured to the machine and the punishment can be set by setting the steam gauge on the whipping arm, to a certain number of strokes, at exactly the same strength each time. 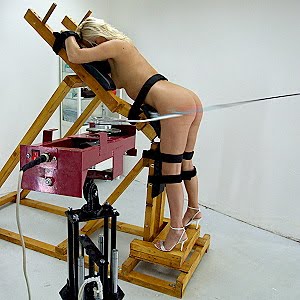 Possibly this image seems sexier for people who read Popular Mechanics and hang around hardware stores. But it does lack the personal touch.

The idea was that punishment could only be just if the same crime always got the same penalty. So whippings by prison officers were unfair, because some had stronger arms, or they might go easy on one offender and really whack away at the next one. 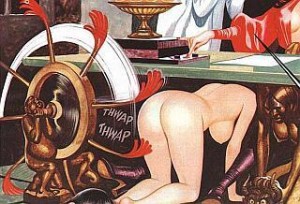 Detail from 1970s “Oh Wicked Wanda” strip. I think the girl under the table is called Candyfloss.