I saw Red Dust last night. It stars Jean Harlow as the slut with a heart of gold, and a young, pre-moustache Clark Gable as an excessively pragmatic rubber boss. 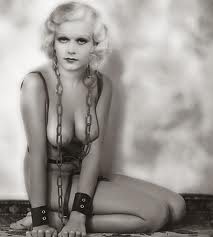 Jean Harlow, chained and cuffed, naked, in a photo set taken before she was a star.

It was made before the puritanical Hayes Code came along, so it was possible for Harlow to do a bath scene, with the lucky filmgoers seeing her sleek bare back and at least being able to imagine what the rest of a naked Harlow might look like. It also means the dialogue can make it clear that Gable fucks both of the two women in the film, and have the characters talk about that, when it matters, like adults.

It’s a good film, mainly because of Gable and Harlow sparking off each other, and because of any other moment that Harlow spends on the screen.

If I had a time machine, there are things I ought to do, like giving embarrassing and career-killing speech impediments to Hitler and Stalin, also Constantine before he marched back to Rome to force Christianity on its citizens. And teaching those stupid sods at Medina to shoot straighter, when Muhammad’s forces were coming. But those would be duties.

What I’d really like to do right now is go back in time to 1932 to meet Jean Harlow with flowers, wine and chocolate to make my intentions clear. And if I am lucky and sufficiently charming, to fuck Jean Harlow.