Asuka obeyed, lowering the panties so her pussy, now plumply visible, seemed to offer itself to him. Seamus could feel himself hardening. When the panties reached her knees, then fell to gather round her ankles, he said, “Step out of them, and give them to me. If you make too much fuss while I’m caning you I’ll put them in your mouth.”

“Hai, sensei.” Asuka stood, panties in her hand. She held them out and kissed his chest through his shirt when he accepted them and put them in his suit pocket. Then she turned, quickly and with just a hint of coquettishness, so that the skirt flared almost up to her waist before she jackknifed again, the uniform now protecting only the upper slopes of her buttocks.

Seamus lifted the hem and tucked it into her waistband. “I’m thinking of giving you twenty. The roaring twenties. Keep still, till I say you can move.” 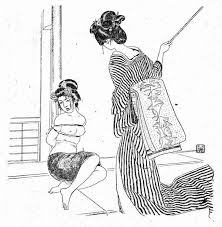 Asuka said nothing, but made a sort of squeak. Something about that sound reached out to him; he was now fully erect. But he took the cane in his right hand and tapped it at the fleshiest, roundest part of her buttocks. So she knew where the first stroke would land. Asuka’s fear sound was lower in pitch. He supposed he’d become more familiar with these sounds, the sounds that Asuka made when she was under discipline, in the coming months.

Then, while he still had the nerve to do it, he raised the cane and swept it down hard against Asuka’s bottom. It didn’t land exactly where he’d aimed, but it wasn’t wrong either. The impact on bamboo upon girl was sharp and loud and it drew a white line across light brown skin, that soon blossomed into a bright red stripe, high on her bottom.

Asuka yelped, then sang out, “I’m sorry!” She held her position, her palms still pressed to the floor.

He followed the stroke quickly with another, this time aiming and landing it a little lower. She squealed and sang her apologies at mounting pitch and volume, but kept in place until the fifth stroke, the first across her upper thighs. That obviously stung more fiercely than the strokes he’d laid across her buttocks. Her upper body rose so she seemed to be bowing, and she took a step forward, breath hissing through her teeth.

2 thoughts on “In the realm of the Sensei 6”