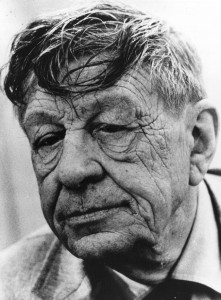 Wystan Hugh: he laid his sleeping head next to a heater, by the look of it.

WH Auden once said that he couldn’t really see why gay men would want to live in a “gay community”. He wasn’t against having a “community” in the sense of a group which you can attach yourself to when you need to exchange information, meet potential lovers, or defend your interests.

He wanted to be able to live as a gay man – he might have preferred “homosexual man” – without harassment or discrimination. He wanted there to be places where be could safely meet other homosexual men. Those places should be protected, not harassed, by police, local authorities and so on.

You can call a group that works to ensure those things a “community”. If you like.

What he thought was silly was the idea that gay men should define themselves first and foremost as gay men, and hang around with gay men in particular, in social and cultural settings. For example, Auden loved opera – even the ones where he didn’t write the libretti – but although he’d go to the opera with his lover of the time, the other guests could be straight, gay, or celibate in any combination, so long as they were informed, interesting and pleasant people.

But I’m also someone trying to write, a social policy consultant, occasionally a public relations hack, a man, a vaguely left-wing person, supporting public services and progressive income and company tax, and a passionately libertarian person. And I’m heterosexual. And I’m a dom.

I suspect that we need politics more than we need a community.