I’ve been blogging about the Australian Survey on Sex and Relationships, and then I told a story about the Gates of Ivory, and the unsatisfactoriness of sex fantasies compared to the most prosaic real sex. And all that time I was leaving a girl in the kitchen.

I was telling you about Charmayanne, who was the younger sister of Zerlina, a woman I’d known for a while. Zerlina and I had had sex a few times, but were were never more than friends. Anyway, she’d mentioned she had a younger sister who was going through a hard time, because she was angry at her mother and stepfather, and she had terrible taste in boyfriends.

A couple of years later, I met that girl in her kitchen. She’d left a neo-Nazi gang, and because I wanted to write a story about them, I’d been keen to interview her. 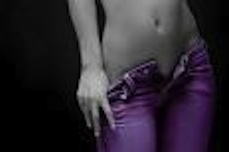 But in the kitchen, we’d found that we liked each other, different though we were in every way. And it had got to the stage when Charmayanne had her jeans and knickers down round her thighs, and we were leaning into each other’s bodies to kiss. But she’d reacted positively when I gave her a smack and told her to open her thighs. So I’d started to talk to her the way I talk to a submissive.

She knew what that was and what it meant. And she froze. And suddenly I was set back several steps. But she didn’t pull her jeans and knickers up, and she seemed fine with my hands on her bare ass, so … something was still happening.