[This story starts at Golden girl #1.]

Emma caught her breath, post-orgasmic and still perched on the edge of the dining-table. I’d liked her readiness to take pleasure and I’d thought she looked beautiful. It had been sexy, but a slightly distanced kind of sexiness, for my taste. As she’d clenched her little stomach muscles and released one ladylike grunt before she began to shake – her orgasm had been deep but silent – I’d found myself wondering, unromantically, if she was going to squirt. I’d considered moving my chair back, but since I was representing manhood, also male domhood, I’d best hold my ground. I sat with my head less than a metre from Emma’s cunt, eye to yellow-lashed eye.

The last time a woman had stroked herself for me I’d told her that she had to come within five minutes or I’d punish her. I gave the deadline so she’d think about the clock and be unable to come. When she failed I’d turned her over and paddled her lower bottom until she was ready to come from that. At the last second I’d stopped, turned her onto her back and made her try again. After three repeats of this cycle her bottom and thighs looked like they’d been caught in an explosion in a cranberry juice cannery, and she was very excited, very frustrated and extremely wary and respectful of the paddle. On her fourth attempt I lifted the deadline and helped her with a little pressure from the paddle’s handle. She’d made a series of noises like someone sailing off a swing at the height of its arc, wailing in joy and fear in the air and then landing on top of a duck, with much puffing and honking at the end. But that was glorious and it was a different story.

Emma’s performance was less satisfying because it wasn’t done for me. The lack of that personal element mattered a lot. Though for Debs, who’d sat quiet beside me throughout, it had been a little too personal. She’d been entranced while Emma stroked herself, but now she was vermillion-faced and awkward, since at eye-level there was Emma’s cunt, while looking up into her eyes would be too meaningful and looking anywhere else would seem rude. I passed Debs her wineglass, to give her something non-scary to do.

Therese put her wine down. “That was three minutes, Emma. You were slow, little angel. How many strokes is that?”

Emma sighed. She looked at me again, but I couldn’t read it. It might mean that she wished I wasn’t there, or that she was pleased I was. It might have meant something else entirely. She said, “Thirty, ma’am.”

Debs fumbled but just saved her glass. Those were the first words we’d heard Emma speak. Somehow it seemed shocking, after such a long time in which she’d had no voice at all, that she should turn out to have such a strong South London accent.

“Then you know what to do.” 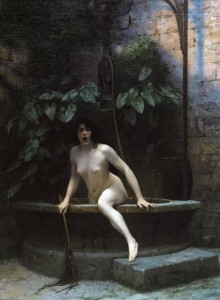 Gérôme painting: Truth rising with her scourge. Or it shows a girl’s horrified discovery that her mistress left the whip in the bath to soak.

Emma slipped off the table, tucked her skirt so it stayed up, leaving her bottom and the floral yellow patch of her pubic hair displayed, and walked elegantly to the bedroom. Drawers opened and slammed closed once she was out of sight.

Therese looked annoyed. Emma should have known exactly where to find the family whip. I said to Therese, because I envied her, “Well, your duty calls.”

Therese smiled properly this time. “Emma is such a foolish girl,” she said complacently. “Jaime, you and Deborah are invited to watch, but …”

“Oh. Yeah. Debs, we need to move our chairs back. Give them room.”

Emma returned, still with her skirt round her waist. She held in both hands a piece of cloth, and in the cloth gleamed coils of braided, dark-tan leather. She walked through the space Debs and I had cleared without glancing at us, and stood in front of Therese. She had her back to us. There was a slight tremor in her left thigh. She put the cloth on the table in front of Therese, and said, “ma’am.”