Gem: I suppose. I might remember what that’s like. Maybe. You’re just fishing for compliments now, aren’t you?

Jaime: See, that’s exactly the sort of remark that’d get your bottom smacked, if you were that sort of girl.

[He’s never threatened or even mentioned a spanking before, not in Gem’s direction. Not even in the most distant and joking way. He pauses to see her reaction. Disappointingly, she only looks wary. He takes his hand, regretfully, off her bottom. They’re still standing close, but no longer touching.] 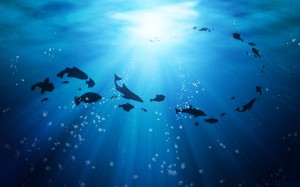 The oceanic feeling: immersion in the sensual world and emotion, but letting go of the will

Jaime: O … kay, so sometimes when it’s very intense, you might get in a state where you just want it to go on forever. You want to be done to, and to give up your own control.

Jaime: And you want to let go, and flow with your feelings and the, um, good stuff that your lover’s doing. So it’s an absolutely sexual feeling, and it’s absolutely about surrender. Okay, so that’s what bdsm’s like. Well, one part of it, anyway.

Gem [frowns]: Yes, it’s funny that you’re only telling me about submission.

Gem: No, it’s okay. Anyway, so submission is that feeling? That’s a great feeling, I love that feeling. But, Jaime, if I can get there anyway, why bother with the other stuff? All the … making people do what you tell them, and the costumes and whips and the smackings? And whatever?