A rich businessman asks a hapless salaryman to “train” his wife, played by Naomi Tani, who he seems to have bought. It’s never explained where she came from or who sold her. (Or if it was, I missed it.) Anyway, the salaryman practises bondage on a blow-up sex doll, and then ties up the “wife”.

Eventually he rapes her so, this film having been made in the 1970s, he falls in love with her and she with him. But the whole film is barking mad, just weird. Sometimes it plays like a film about adult sex made by 5-year olds.

But time has taken away much of its power to be shocking: the comically terrible acting, the 70s haircuts, and some weird Freudian stuff about mothers, undercut it a lot. A lot of the time I couldn’t tell if it was trying to be funny, or if it just was unintentionally funny.

As I’ve said, the sexual politics are pretty dodgy, but “Flower and Snake” is probably less misogynist than, say, any Clint Eastwood film made that same year. Which isn’t a strong defence, and it’s not meant to be. 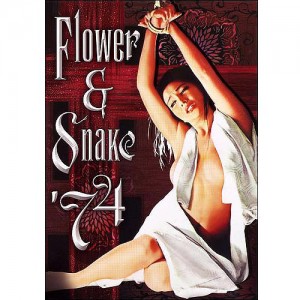 But if you read it as a document from the past, and interpret it for what it says about being bdsm-y in Japan in the 1970s then it’s fascinating.

Also, the woman star, Naomi Tani, is amazing. Maybe the cinematographer was in love with her, or something. But she glows on screen while everyone else has faded. It’s still a weird, terrible film, but Naomi Tani is astonishing. She is beautiful and she can act. What the hell is she doing in this film?

I’m going to get back to my story tomorrow. I’m still catching my breath at the moment.