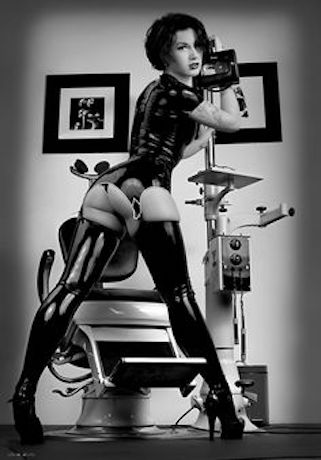 Sorry. It’s been a while since I posted. I’ve had a hole bored in my jawbone and a steel pin inserted into the hole. I’ll get a crown some time in December.

That was on Tuesday. The rest of Tuesday was a write-off, and so, surprisingly, was Wednesday as well. Probably because of the pain-killers more than the pain.

I was a bit more battered than I thought I was. Battered like an old car, not like a fish. Or a battery. I was the batter-ee.

Now I’m still trickling the odd bit of blood, and I’m guessing that the floor of an abatoir must taste a lot like the inside of my mouth.

But I’m feeling a lot better. Thanks!

My main memory of the whole thing was the hair, hands, mouth and breasts of the dental assistant who was using one of those slurping machines to suck out the blood and bits of bone. I suppose it’s natural to focus on the best life has to offer, at a time when most of the incoming sensory information is (literally) bloody horrible.

Maybe the reason why dentists tend to have pretty girls as assistants is so that patients, at least those who are susceptible to pretty girls, have something to distract them from the gory goings-on in their mouths.

And male dentists also like to have a pretty girl about the place, since the inside of someone’s mouth, when that person needs dental treatment, ain’t that pretty at all.

I’ve been to two women dentists, by the way, and neither of them had dental nurses. So dentistry, like political assassinations, can be done by one person acting alone.

I know that dental nursing is a skilled job, and it shouldn’t be turned into a wank fantasy. 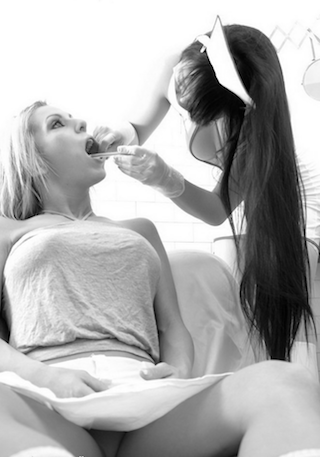 It is required by law that this picture be captioned, “Open wide.” (I fought that law, but the law won.)

But the people who get that job tend to be young, pretty and female, which isn’t entirely fair on job-seekers who aren’t. That’s not the fault of the pretty young women; it’s more the fault of, oh, you know, patriarchy.

For me, no matter how charming I might think I am, I know that dental assistant has seen the inside of my mouth at its bloodiest and worst. That’s got to be a profoundly repellant sight.

There must be guys who spring out of the chair once they’ve got the all-clear, flashing their most brilliant smile at the nurse and trying to engage her in witty, flirtatious conversation. But me: Nah. Just … no.