About twenty-two thousand years ago a tribe of humans crunched across white grass in a frozen landscape that’s now called Russia. Somewhere near the Don river valley they left behind two little sculptures. That’s how we know that these people, whoever they were, passed that way. It’s also how we know something surprising about their sexual imagination. 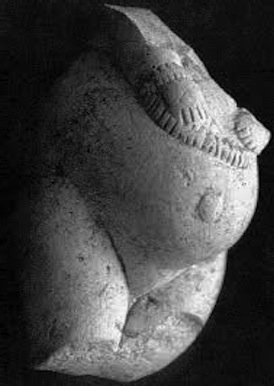 These two sculptures, each one about the size of your hand, are of women. Like other Paleolithic “Venus figures”, the women are naked, or nearly naked, with exaggerated sexual features: their breasts hang hugely, like great sacks of grain, and their bellies swell, pregnant and vastly fat, like a ship’s sails.

What’s unusual about them is that one of the two women is shown with her wrists cuffed and tied, while the other woman is shown wearing a sort of harness that both restricts her movements and emphasises her breasts. That’s all they are depicted as wearing, although these images were created in the middle of an Ice Age. These two little sculptures seem to be the oldest known bondage erotica.

That tribe moved on, their destination and fate unknown. Since their day humans have done and built a lot of things, but some things don’t change. For one thing, it can’t be said that Russia’s improved much.

For another, it’s still true that whenever a new medium appears, from carving rocks to 3D imaging, one of the first things people will do is use it to make sexual images and tell sexual stories. And shortly after the first nudes are produced, someone else will come along and use the new medium for more specific sexual desires. 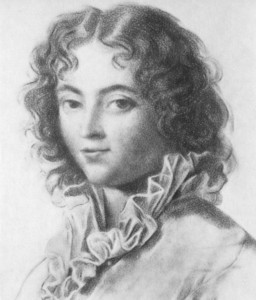 Constanze Mozart: Mozart wrote to her, promising her a “thorough spanking on your dear little, kissable arse”, when he got home. Did he deliver? The look in her eye says yes.

As a Mortimer, I’m quite proud of my sculpture, “Caning Bench No 1, with Comfort Saddle and Hooks for attaching Cuffs”. If some archeologist finds it  21,000 years from now, I hope he or she puts it to good use.

I’ll be doing to some of that celebration over the coming months.