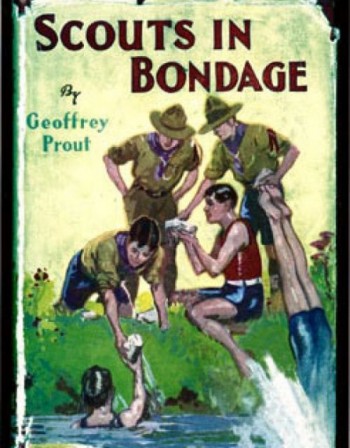 Boys own story, published in the 1930s. The scouts’ bondage was “spiritual”. I sometimes tell that to submissives, when I tie them to the kitchen table.

I was a scout for about half an hour when I was six.

It wasn’t my choice. My older brothers were scouts, and I could see scouting was as boring as school and likewise involved adults telling you what to do, but you were supposed to do it voluntarily, in your own time. Sod scouting, I thought.

But my parents got me in.

My own efforts got me out. I climbed a flagpole – they had lots of them –  and said every rude word I knew. That didn’t take long, as I was an innocent child. But it was enough to get me thrown out.

So mission accomplished. There was trouble with the parents afterwards, but it was worth it.

Still, it meant I never did get my knot-tying badge.