Skip to primary content
To that high Capital, where kingly Death
Keeps his pale court in beauty and decay,
He came; and bought, with price of purest breath,
A grave among the eternal.—Come away!
Haste, while the vault of Waitemata’s day
Is yet his fitting charnel-roof! while still
He lies, as if in dewy sleep he lay;
Awake him not! surely he takes his fill
Of deep and liquid rest, forgetful of all ill.
.
My father lies in a coffin in his homeland. I leave tomorrow to be with my brothers and sisters, and his body, at his funeral. It’s only for a few people: his children and their partners, and a few grand-children. My mother’s funeral was a bigger affair, but that was because he was alive, and he needed it. Now he needs nothing.
. 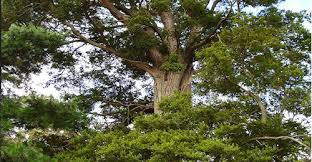 Totora live for 1,000 years. This is the oldest known totara tree. Its name is Pouakani. It has a temper, and its best not to sleep under it.

On Saturday we’ll drink the horrible sherry he drank, in his honour, and tell stories about him. And he will be cremated. In a year’s time, his children, my brothers and sisters and I, will come together again to mingle his ashes with those of the love of his life, our mother. We’ll dig a hole in the earth among the roots of a young totara tree, which will be fed by both of them and of which both of them will become a part.

No one in my family believes in life after death, including my father. He knew he’s not going to join my mother for sherry on the balcony in heaven. But he found the symbolism of that reunion in a living, growing thing was right and comforting.
.
I’ve written about my father before. My father was a man of power, both the possessor of institutional power by holding various offices, and of personal power. He was, I’m pretty sure, not into bdsm himself, but the way in which he exercised power has been the model for a lot of what I do as a dom.
.
That is, he exercised power in a way that was kindly, mostly selfless, and that didn’t take himself, or power, entirely seriously. At the same time he could be terrifying. He used that power to keep some sort of peace in a school playing-ground, and, later, working for the UN, trying to keep the factions working together in places like Afghanistan.
.
I use that skill more trivially, for the pleasure and amusement of submissive women. So long as they know it’s not real, so that it only feels as real as they want it to. Because I know some things that my father didn’t know, I’m suspicious of power, except where it is received voluntarily, and it’s at the service of sexual and other pleasure.
.
Still, he used his power as benignly as he could manage, and since he was intelligent and strong, he could manage a lot.
.
With his passing I become a kaumatua. Of no hapu, but still, there it is. I’m next in line.

Note:
Because of the death in the family, this isn’t the planned Wicked Wednesday story. But Jennifer and her headmaster will be back next week.

11 thoughts on “Wicked Wednesday: The pale court of kingly death”