Seamus assumed, then, that while he was caning Yua, none of his class had studied their page as he’d instructed. The book was HG Wells’s The War of the Worlds.

So he set them an essay on the Momotarõ myth, in which Momotarõ was sometimes born to rule over lesser people and sometimes an evil invader who slaughtered peaceful natives. The essay had to compare the Momotarõ stories to the The War of the World‘s treatment of imperialism.

“You can write it in Japanese if that’s easier. But if you try to write it in English you automatically get an extra grade. Yua!” 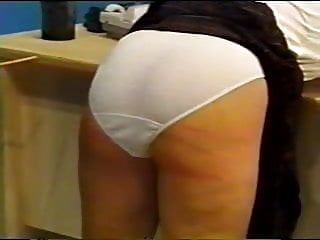 “Sensei?” She turned her face from the wall to face him, while keeping her body more or less in place. The welts on the sides of her buttocks, where the panties did not cover her, were bright and somewhat raised.Her thighs were slim, but soft. He could not help but think of how they would feel, wrapped around his upper thighs, or raised to hold his waist.

He suppressed that thought and said, “Yua, you start a grade down from everyone else. But if you get anything less that a B+, I’ll cane you every day for a week. Understood?”

Her eyes widened. That meant she would have to work hard. She said, “Hai, Sensei.”

He turned back to the class. He knew from their occasional inattention that Yua, behind him, was wriggling, but he ignored that. Finally the bell rang and the class filed out. Except Yua. She knew they still had business, she and him.

At last they were alone together. Yua stood silent and stil, with her hands on her head, expectant. “Come here, Yua.” 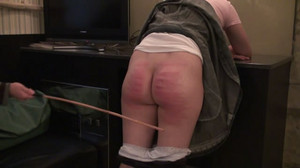 When she reached his desk, smiling, sure of her power and victory, he made her turn around. He tugged her panties down, to inspect the damage. She had been well and prettily striped. He took the cane and put it between her upper thighs, close to her cunt.

“Don’t touch this with your hands, and don’t let it fall. Carry it for me while you go into the storeroom. And wait for me. Go!”

The cane between her thighs waggling as she walked, Yua went. She left the door open.

4 thoughts on “Wicked Wednesday: In the Realm of the Sensei 21”