This is a bit from “Between the Lines” about the second (or fourth, if you counted two excruciatingly embarrassing first attempts) spanking I ever gave. 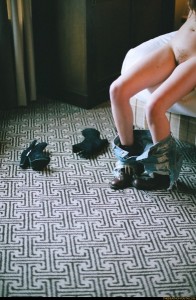 “The click of her bedroom door closing had enormous importance. We undressed with fumbling speed, not speaking until Maureen lay back on her white sheet and I lay between her long white thighs and I kissed her belly and the vault of her ribs. Only then could we pause to talk. It seemed that in the hours we’d been apart we’d done things that we had to do, for purposes that had nothing to do with this bed, and that none of those things were of any importance at all.

We focussed on what was of interest. I rolled onto my back and sat up, pulling Maureen with me so she sprawled on top of me. She raised herself on her hands and looked down into my eyes, then slid herself down to lie, long, cool and white across my lap. She closed her thighs on my cock, and waited.

Our first experiment had been all immediacy, both of us sliding on the edge of the instant like skiers half a step ahead of an avalanche. This second exploration was different. Time moved normally. I contemplated Maureen’s beauty and the astonishing gift that her posture represented: the magnificence of her permission and the luxury of time to enjoy it.

Her pale length was still tinged with pink at her lower buttocks and upper thighs. The coloration was so faint that if I hadn’t known it should be there and wanted to find it I might easily have missed it. I was relieved to find I’d done Maureen no damage, but I had to admit to myself that I was also disappointed. I wasn’t entirely civilised: I’d hoped that I’d left my mark on her.