We share over 98 per cent of our genes with chimps and bonobos, our closest kin. When we watch them we read their expressions and body language, and we often think that we know what they’re feeling. 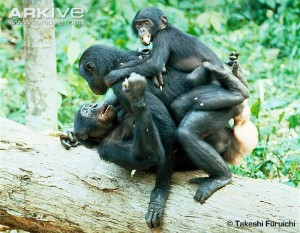 That can tempt us into “explaining” human traits by finding some precedent for those traits in primate behaviour. That’s one reason why evolutionary psychology books sell well, but haven’t won much academic support. At its simplest, the evo psych bestseller involves selecting an aspect of the behaviour of one or two species and arguing that this explains similar behaviour in humans, or that it provides a model of “natural” behaviour for humans.

“Natural” primate behaviour includes male dominance, female resistance to male dominance, pair bonding, harem formation, and promiscuity. All of these things exist in different human cultures, but the existence of the primate models doesn’t mean that any of these options are particularly “natural” for humans.

But there’s something there, between us and our cousins. When we see a chimp or bonobo mother comforting a hurt infant, cradling the infant in her arms, gazing at it and pursing her lips and making soft sounds, patting it and stroking, we don’t really know what that mother or infant are thinking, but we probably do know quite a bit about their emotions. Sometimes the emotional situation, the gestures, the sounds and the expressions are so close to ours that it seems reasonable to suppose that we really do share some experiences and sets of feelings across the species divide.