That’s what the thunder said. You know that.

It had been the hottest, most oppressive day you can imagine. The sky absolutely still, the temperature far too high and the humidity close to 100 per cent. You felt you could reach for a handful of air and squeeze it like a sponge. I was at my desk in just my underpants, trying to write, with sweat running down my body.

Then, finally the clouds arrived, speeding like the Seventh Cavalry, like a huge black blanket being towed by a speeding car. The rain came. It was a tropical downpour, with water drops as big as golf balls.

I heard a whoop from the other office; Therese, my houseguest. A few seconds she ran into my office, wearing a summer shirt, a bra and knickers. She grabbed my shoulder, leaned down and kissed me. “Let’s get the fuck out into this!” 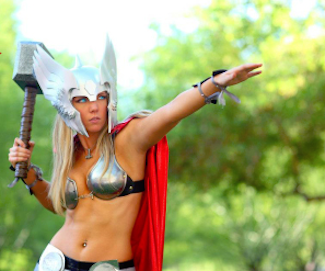 So we ran out into my front yard, and her shirt was instantly soaked, clinging transparent to her skin. We squealed and yowled, running circles round each other and dancing at each other, furiously, stamping on the grass so the rain jumped, all energy and no grace. It was pagan enough.

Then the lightning struck; the thunder spoke only two seconds later.

The lightning bolt was only a couple of kilometres away. In lightning terms that’s right on top of you. The next bolt hit a tree on the property next door. The thunder was so fast, and close and loud that we both ducked, involuntarily.

Therese grabbed my arms and rolled down onto her back, pulling me down with her. On top of her. I pulled her shirt away from her body, and pushed her bra up, round her neck. She lifted her hips, so I shoved her knickers down to her knees, and put my foot into the gusset, pushing them the rest of the way down and off.

I said, “Um, I didn’t pack any condoms. Must have left them in my other underpants. I’ll- ”

She grabbed my shoulder again. “I’m still bleeding. You don’t mind a bit of blood, do you?”

“Fuck no.” That was the answer she expected. Years ago, when I started university, she’d been the first girl to cover my cock in her menstrual blood, so she knew I had no objection. (Though when I’d seen myself in the bathroom mirror post-fuck, that first time, with my cock covered in girl-gore, looking like it’d been in a car crash, I’d found that a bit of a shock. But I got used to it, and I’d never told her that.) 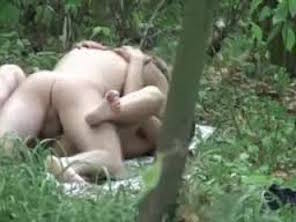 “So you’re not going to get me pregnant. Fuck me. You can come in me.”

There were urgencies involved, so I said nothing and slipped my cock into warm, viscous cunt. We held each other and fucked, rolling each other over and over in the rain, with the lightning crashing around us, and the air we were in flashing into brilliance, and the thunder roaring.

Her cunt and my cock, sharing body territory, were wet and slippery, and because we’d started hard and fast, and continued faster, it was only a few minutes before I shouted something wordless, and made that space even wetter and more slippery.

She shouted for me not to stop, so I stayed, still pumping furiously, hoping she’d come while I still hard. And she screamed, water pummelling her opened mouth, and she drew her knees up, since she was on her back at that stage. She wrapped her legs round me. We lay in the grass, gasping, while the rain poured onto us, not so much in drops but as if someone was tipping out baths and 40 gallon drums of warm water onto us.

Klick on the kiss for more Kink of the Week posts!

8 thoughts on “Voice of the thunder”