So, Russian bureaucracy is … frustrating. I don’t have my visa, and they took my passport, while they consider whether to issue me with my visa. 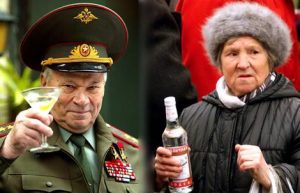 So if a Jerusalem Mortimer starts committing assassinations, etc, I’ll know it’s a Russian agent using his replica of my passport. Which will be a great consolation to me when I get arrested somewhere or put on a “no fly” list.

No wonder Russians turned to drink during the Stalin years, and haven’t weaned themselves off yet.

Mind you, Israel does that as well: taking the passports of tourists, or copying them, to be used by their agents when committing what Auden called “necessary murders”. I guess the US of A doesn’t need to: they have the resources to create their own fictitious passports.

My nationality is a country that doesn’t really have any enemies. So it’s useful to use our passports (or replicas) to commit state-sanctioned murders or espionage, because we are, by and large, innocent travellers who nobody minds, or pays much attention to. There are documented cases of this, some of which have led to open diplomatic rows: it happens. On the other hand, my country doesn’t really have any political, economic or military power, so there’s bugger all we can do about it. Beyond throwing the odd diplomatic tanty.

Well, as Stanley Kubrick (oddly enough) said, “The great nations have always acted like gangsters, and the small nations like prostitutes.” He wasn’t completely right about the small nations though: we get screwed, but we don’t get paid. 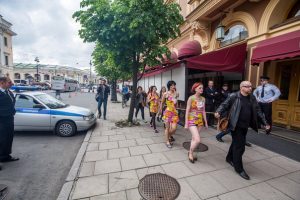 Sex workers protesting against unjust laws, police harassment and lack of legal protection in Russia. The guy in front is a sympathiser, enacting the role of pimp.

Speaking of Russian history, my first stop is Moscow. I understand my hotel is surrounded and besieged by sex workers, in a deployment based on the one the German army used in their encirclement of Leningrad just 76 years ago.

I wish them only well, because they have a rough time. Russia’s anti-prostitute laws are overseen by a Cabinet Minister who said sex workers are as bad as murderers. They risk theft, rape, violence and murder by police, customers and organised crime.

But I’m not a customer, for reasons I’ve set out elsewhere.

But if you’re interested in finding out more about the conditions sex workers face in Russia, here’s an interview with Irina Maslova, of the Silver Rose partnership of sex workers and supporters. She’s pretty damn impressive.

I’m going to be looking at architecture and art, mostly. I like those onion-shaped mosque things on the older buildings. And O Budgiegod, the art: a whole lot of stuff never seen in the West.