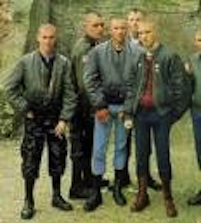 It’s a very retro look, the skinhead thing. These are 1960s skins, but the guys who crashed the party dressed exactly the same. But they didn’t listen to ska anymore; it was white power music.

I was at a party once, that got gatecrashed by skinheads. Shaven heads, Doc Martin steel-capped boots, yellow laces, admiration for Hitler, weird views about Jews and Asians, and so on. Neo-Nazi skinheads, not the fashion trend following kind.

Quite a lot of the guys at the party got beaten up, and … I couldn’t see anything I could do. I could get beaten up too, but I couldn’t save anyone else. I hadn’t punched anyone at high school or since. I was shit at fighting. So I wasn’t much use to any of the non-skinhead guys present.

The skins didn’t attack the women. They made themselves unpleasant, but they didn’t do any punching or raping.

They’d planned it. Someone in the house must have annoyed them, because they’d guarded the doors and windows so there was no way out.

So, because my girlfriend and I were less drunk or drugged than most people there, we climbed to the end of the fire escape, and then pulled ourselves up onto the roof. It was quite cold up there under the stars, with this house of horror scenario going on underneath us. She was shivering, so I held her tight for body warmth. 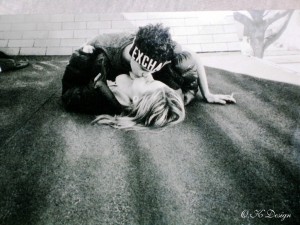 We finished up fucking. On a sloping corrugated iron roof, with a two and a half story drop below us, and nothing to break your fall except the concrete at ground level.

We must have made enough skeleton sex noise that the skins realised there were people hiding on the roof, because one of them poked his head over, but before I’d even moved he fell while he was trying to pull himself up.

He must have hit the concrete walkway at some speed, but I never heard the impact, or what happened to him. Drunks are often lucky. I don’t like skins, but I hope he was lucky.

Eventually, it was the women at the party who saved the guys. They realised that the skinheads weren’t just ideologically weird about women: they were afraid of them. So some of the bigger women simply beat up a couple of the leaders.

The skins leaders didn’t know what to do. Getting punched by big punkette and goth women hurt, and it was humiliating; it didn’t fit the things they believed. Then the guys from the party started punching back, and someone grabbed a poker from the fire and was angry with it. This time the skinheads lost.

Me and girlfriend, we were on the roof. Unscathed. Useless.