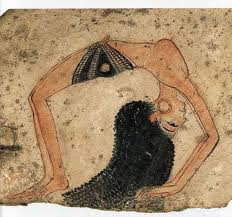 No matter how she tried, she couldn’t shake the damn stuff off.

The fact that I was there, having coffee with them, was part of the reason he chose that slightly out-of-the-way punishment. It was certainly the reason why he chose to announce it to her in front of a third party. Humiliation is a sweet sauce.

From the woman’s reaction – she got quite lively after he’d pronounced sentence, and then very quiet and submissive – it was clear that she found it quite a challenging form of punishment.

It was also clear that she loved it. Perhaps she liked it best after the first hour was over.

After about ten minutes, the man told me, it would burn like a mouthful of wasabi. She’d find it nearly impossible to keep still, for the next forty minutes. Which was why he would insist that she stood perfectly still, and punish her hard for any wriggling.

It’s hard to imagine being so busy that I’ve never got around to doing this myself, but that’s what’s happened. I’ve filed the idea away, and never had the time for it. But I’m going to do it next week. I’ll let you all know how it turns out.

Update: I keep my promises, really. Eventually. I’ll tell you about it in my post for 21 September 2014.

The report on my experiment is here.

3 thoughts on “Toothpaste on the clitoris”