I wrote a series of posts, “The shame of being a dom”, which included the story of Maureen. That story includes one completely WTF moment. We were discussing English literature because I was helping her with her assignment. Though it’s unwise to do this on a bed, naked, if you want to get any work done.

But still, this dialogue happened:

Me: Well, you can say Milton’s Areopagitica is an ambivalent defence of free speech, and hey! you could link it to the Romantics’ idea that Satan was a sort of spirit of freedom. Must be at least 400 words in that.

So, I thought at the time and afterwards, where the fuck did that come from? Why did she say that? I was glad she did say it, and the consequence was a relationship that turned out incredibly hot for both of us. But … why?

I asked her then and later, and she claimed she had no idea. She’d just thought it’d be something I liked. She never expected that she’d turn out to like it so much as well.

I have one theory. I already had a library, a collection of books that followed me round from house to house, that was more than you could fit into a single car. (You’d need a couple of trucks, now. I know this, because when I left the city and moved up to the mountains, the books did take a couple of large trucks.) 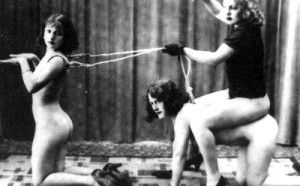 Why are these girls doing what they are doing, in this photograph? Charming, yes, but it is sexy?

Anyway, Maureen noticed that the book fell open at certain places. She was right. There were some images I really liked, not because they were charming but because they were hot. She knew young men, and she knew that I’d held that book in one hand, and my cock in the other, and that explained the book’s tendency to open itself at the images that still held their sexual charge.

And so that’s how she knew that if she offered me her body, in submission, I would be most willing and overjoyed to take it. In my stylish and articulate way:

2 thoughts on “That Maureen story: the WTF moment”