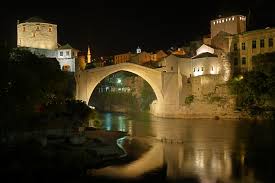 But I was walking near the restored Old Bridge a little after one in the morning, the drink and drugs part of a Mostar night.The bridge was still crowded, lovers looking down into the river, some drunk tourists looking for whores, skinny old men with grey moustaches. They wear baggy trousers, the pants they wore when they were younger and bigger men.

And their hats are grey. Fedoras, I think, with black sweatbands. The men get skinnier as they get older. The women get fatter. There’s nothing wrong with that. I just don’t know why.

A beautiful girl emerged out of the crowd, dancing and walking towards me from the darkness. She looked at the mist shining round each of the bridge lamps, dandelion spheres of light. She was entranced by them. She was trying to dress like a scary goth, but she looked like a girl in her mother’s clothes. She was twenty, blonde, ridiculously pretty, sweet-faced and struck by the beauty of everything around her.

She veered my way and into my arms. I was wearing black pants with hose and a russet-red frock coat, in the manner of Van der Decken, the captain of The Flying Dutchman. I had my reasons, which seemed perfectly good at the time.* So I stood out a little, though though not quite as much as the lamp posts.

She said something questioning, which I didn’t have the language for, but I guessed she was asking permission to put her arms round me. Anyway, she did, and then leaned in, getting Cleopatra black eyeliner on russet silk. I hugged her back, keeping my hands well clear of her ass because I didn’t think this was driven by lust.

Not even though I was dressed as an eighteenth century Dutch sea-captain and had such fine legs. Maybe If she’d been a girl stowaway pretending to be a cabin boy,  then she’d have been overcome by lust. I said, “Ah, you’re lovely.”

* I was looking for a girl wearing a hooped green crinoline dress and no knickers. I hoped she’d have some sort of thing going for romantically cursed members of the Dutch merchant marine. Mostar has everything. Sometimes.