I’ve been writing a teacher/schoolgirl story for a girl who liked it when I started making one up for her, sort of impromptu. That’s why the written version of this story, on this blog, seems to start at the second episode. The first episode was spoken, not written, and now it’s gone.

But I’d be lying if I said that I chose the teacher/schoolgirl scenario only to amuse a pleasantly depraved woman. The fact is that I’ve always been partial to an adult woman wearing a gymslip and carrying a note that says she’s been late for school again.

So why is it hot? 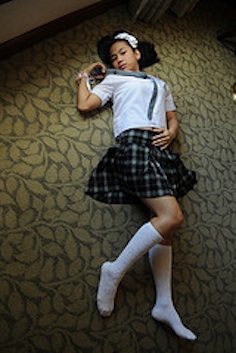 Well, first, the costume and the look is great. The girl’s school uniform, with the little pleated skirt, is one of the classic sexy looks of all time. If the little black cocktail dress is universally agreed to be sexy (and it is), then this should be as well.

It’s the original flappy skirt, one that threatens to blow up at the slightest puff of wind. But it never quite does unless the woman in the skirt wants it to.

There’s also a kind of misdirection about it, that helps to make it sexy.

That is, a woman in a little black cocktail dress is dressing to be sexy.

Whereas the schoolgirl look is supposed to be about, oh, education and stuff.The sexiness is supposedly accidental. It’s similar to the way the librarian look is sexy. 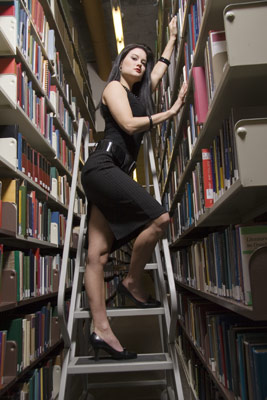 Those looks have two messages where the sexy little black cocktail dress has only one. The apparent message of one costume is about physics classes and exams and organised sports, while the other costume’s surface meaning is about getting books into alphabetical and Dewey classification order while telling people to shut up.

The sexy underlying message of the costume subverts the apparently strait-laced surface meaning.

Well, complexity can be sexy, but subversion is always sexy.

I’m going to have to leave it there for today. Back tomorrow.