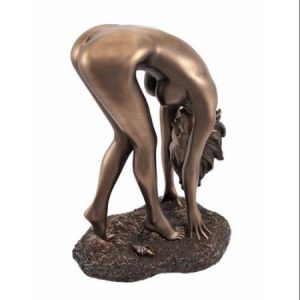 In our room we both stripped off our clothes, and showered together for warmth. Once we were out, I dried her roughly with the towel, and then told her to fetch the tawse.

“Fetch” is such a sexy word, in these circumstances.

She got it from the bedside drawer, on her side of the bed. It was on its side, being too thick to be coiled, or even folded. She held it out to me with both hands. “Sir.”

I took it from her gravely, and held it, in my right hand. It’s odd how something that small changes the emotional and sexual dynamic in a room. “If I told you to assume the position, Shar, what position would you assume?”

“Um. You’re a traditionalist. Sometimes. So I’d bend over, very tight, with my legs together but my bottom arched up so you can watch my cunt. And I’d put the palms of my hands on the floor. Since I’m so bendy, and you like a bendy girl.”

“Um. Fuck.” She did indeed know me. “Then I suppose you’d better assume the position. Shar.”

“Sir.” And she did as she said she would.

It was easier than it sounds, for Shar to place her palms on the floor in that position. There are times when short girls have an advantage. I watched her, awed. Sexual presentation has power, of course. It works on bonobos. It works on me.

I raised the tawse. I wanted to hear her scream tonight. The first time from pain. Probably not the second time.

2 thoughts on “Random bit of novel: What “assume the position” means”