I’m taking a short break from the Golden girl saga. There are probably only two more episodes left in it. It’s a true story, by the way, with the usual changes to de-identify people and to fill in gaps in my memory. 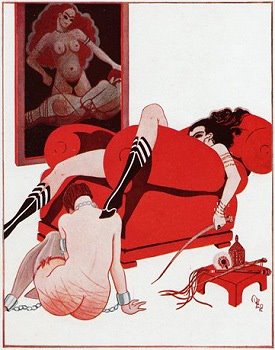 An image that haunted my twelve-year old imagination. How could the world have something this sexy in it?

I should say that Therese really did talk like that. Writing her dialogue, she sounds like a slightly kinky lesbian from a 1920’s or 1930’s novel. Like Radclyffe Hall, only with a whip. (There’s probably no such tumblr. Though I haven’t looked.)

I didn’t notice it when she was saying these things, because she carried it off so well. She was a professional, and therefore an actor. She’d chosen the style and she stuck to it.

I’m pretty sure that if I had a woman bent over a table and a whip in my hand, no matter how fraught that hanging moment might be, if I said something like “And not a peep out of you, dear”, that girl would laugh her fool head off and the tension would fly right out the window.

Sure, it’d be replaced by some new tension, because there’s plenty available in the moments before a flogging begins. Still, one moment of it would be gone forever.

But really, I just wanted to post this drawing by an artist who called himself “Phegor”. Phegor is a demon in the Old Testament (that is, someone else’s god), so it’s probably a pseudonym, shall we say. Anyway, I first found it in a book, “The Cruel and the Meek”, when I was about twelve and already well aware of my desires. I thought this was the sexiest, darkest, sweetest, sweatiest, hottest image I’d ever seen.