I mentioned in an earlier post that I was once at a party that got crashed by neo-Nazi skinheads. And that I’d headed ingloriously but safely for the roof while the fighting and bashing went on below. A couple of years later I met a girl who used to hang out with that gang.

I was writing a magazine piece on boot boys, and a mutual friend had asked her if she was prepared to be interviewed. She’d agreed, so I met her in her parents house. They – actually her mom and her step-dad – were away clearing blackberry tree stumps off a piece of land they’d bought in the country. She had the place to herself. Except for me knocking on her door.

The girl who answered the door was maybe twenty-two. I was twenty-eight. Her hair was short and dyed blue and green. She wore torn blue jeans and a very big jersey. She was tall and very slightly plump, so she was quite an imposing girl. 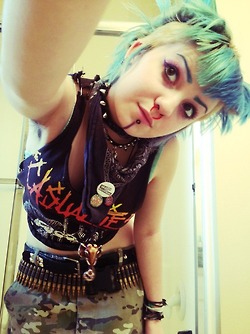 So we sat in the kitchen, with my recorder on the table. It turned out I knew her older sister, and she’d said I was ok, Raylene (that’s the name she’s going to travel under in this story) was quite relaxed about talking to me. So relaxed that she poured us glasses of her parents’ Drambuie, though it was two in the afternoon.

Raylene said she hadn’t really been a Nazi or even a racist, but her family life had been chaotic while she was growing up, and she’d gone a long way off the rails. That made sense to me from things her sister had told me about a younger sister whose name, now I came to think of it, was Raylene. I hadn’t made the connection.

Anyway, she said the gang were violent white supremacists, but they’d given her a sort of family. And because her mother’s new lover was Cambodian it had seemed to her to be the best possible way of hurting both of them. She’d got involved through some guy she was with at the time. She was very blank about that guy. It was obvious that that hadn’t ended well.

At that time she’d been out of the gang scene for seven months. She’d made peace with her mother and her remarkably patient and forgiving step-dad.

After some casual conversation, I asked her more focussed questions about the gang, how many people there’d been, the age range, and general information like that. That was all useful, but I really wanted to get her talking about harder and darker issues. Like killing people. Like whether she’d been close enough to the inner circle to be able to tell me things people didn’t know, about their funding, and that kind of thing.

She smoked constantly, lighting up and mashing out ciggies, very quick and nervous. I couldn’t blame her. The stories she had to tell me didn’t show her in a good light, and she knew that I really, really despised her gang.

Also, she had to trust me not to write a story that would bring her grief: there are a lot of different directions that grief can come from, when you’re an ex-Nazi gang member. I’d promised that I wouldn’t identify her (a promise I kept, in the article I wrote, and that i’m keeping here), and I wouldn’t write anything to harm her.

Because she looked down most of the time, not wanting to meet my eyes while she told me things she was ashamed of, I could watch her while she talked without being unreasonably rude. She was awkward with her body; she was hunching her shoulders forward to draw attention away from her breasts, which were buried under a lot of jersey, but seemed to be heavy and firm, which is one of the many ways in which breasts can be wonderful.

But she was awkward about her body in general. She was very female, er, shaped, and everything about her movements and her clothes seemed intended to neutralise that impression.

As we talked I realised that although I hated what she’d been doing, and some of the stories she’d told me about things she’d taken part in were horrific, I liked her quite a lot. She was honest, she faced up to what she’d been doing without trying to make herself the victim, and she was brave. She wasn’t remotely stupid, and she’d read real books. She could be darkly funny. There was an older, softer personality underneath all the toughness.

After a while we took a break, and she got up to make a pot of tea. I watched her leaning over the sink, filling the kettle, and the jersey lifted at the back to show that she had a very nice arse, and that she wasn’t wearing anything under the jersey. And I realised that I fancied her.

I had absolutely not expected that.

3 thoughts on “Public humiliation of an ex-Nazi 1”