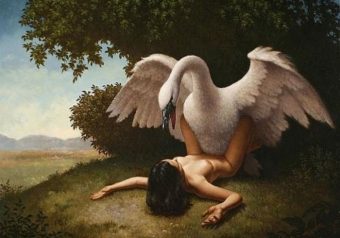 “How can those terrified fingers push/  The feathered glory from her loosening thighs?”  Leda fucked by Zeus, who’d transformed himself into a swan for the purpose. Little-known water-fowl fact: swans have penises. (So, by the way, do mallards, including Donald Duck. Lucky Daisy.)

“One might think that Kant is there under the pressure of what he hears too closely, not of Sade, but of that mysticism that is Sade’s home, in the sigh that chokes at what it foresees, to have seen that his God is without figure: Grimmigkeit? Sade says: Supreme Being in spitefulness.

But pfutt! Schwärmereien: black swarms, we drive you out, to return you to the function of the presence of the Sadean ghost.”

That’s from “Kant avec Sade”, by the French psychoanalyst Jacques Lacan. Any paragraph of it is much like any other.

“Grimmigkeit”, by the way, means ferocity, while “Schwärmereien” means rapturous or fanatical intensities, but is a pun on “Schwärmen”, meaning swarms. There may also be an allusion to “Schwänen” (swans), as black swans are celebrated in philosophical circles for disproving the proposition that all swans are white. Lacan was celebrated for his wit, in Lacanian circles. 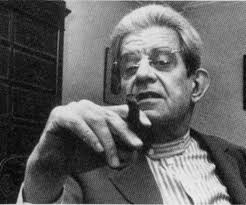 Lacan’s own career offers an example of this confusion. Lacan treated his followers with contempt that was, arguably, justified by the quality of the work they admired, but in addition he mentally and physically abused vulnerable patients, which is perhaps less forgivable. Lacan’s abuse escalated to open, violent beatings of mentally ill people.

Other psychoanalysts described Lacan’s assaults on patients as “sadistic”.

In reality it’s unlikely that Lacan derived any sexual satisfactions from beating his patients. He was not a “sadist”; he was simply an unpleasant bully whose violence went unchecked because he headed a cult. 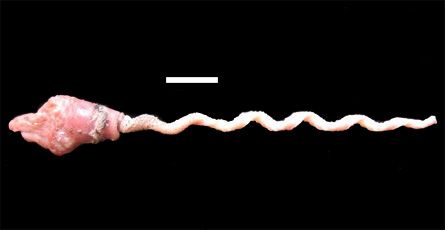 One picture of Lacan is enough for any blog. So let’s go out on a picture of a prick. A swan’s penis. Pfutt, indeed!