We Doms/Dommes sometimes make house calls. Sometimes. Conditions apply. The submissive has to have been exceptionally bad. Or good. 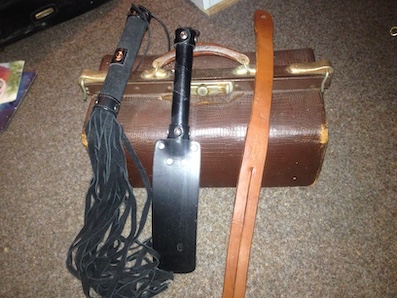 But when we come visiting we can’t take all our paraphernalia with us. Generally the whipping bench and the leather sling attachable to the ceiling have to stay at home. Forlorn.

We have to choose just a few treasured items to take with us.

Some Dom/mes have a basic house call bag. There’s mine, above. A flogger, a tawse and a paddle.

As well as those implements it contains the usual stuff: padded cuffs, a collar and leash, nipple clamps, condoms, lubes and so on.

But if I was only going to bring one implement to a scene, it would be a flogger.

In this post “implements” means “things used in impact play, usually on the buttocks and upper thighs.”

There are two kinds of implements, broadly speaking. Some are rigid or nearly so, like a hairbrush, wooden paddle, ruler, cane and so on. Others are pliable, like a belt or strap, a whip or a flogger.

The difference between a whip and a flogger can get a little hazy, but essentially, a whip has a single tail, or anything up to around five. From the recipients’ point of view, whips are generally thought to deliver a stingy sort of sensation.

Floggers generally start around nine tails (the cat’o’nine tails used in the Navy was essentially a flogger). And from the recipients’ point of view, they deliver a thudding sensation. As most submissives prefer thud to sting, that makes floggers more popular than whips.

There’s one more distinction to make. Most floggers have lashes about half to a third of a metre long, and are fairly substantial implements. They can be used while the partners are in bed together, but also for a more formal flogging, in which the submissive is bound, standing up or lying across the bed, while their disciplinarian stands a short way aside from them to deliver the strokes.

There’s another class of flogger that is much smaller, almost always has soft lashes, of about 10 to 20 centimetres long. These can’t really be used for whole body flogging: they are designed for nipples, cunts, cocks, the sensitive skin between the buttocks, and other areas that couples, or threesomes or whatever, considers to be especially erogenous and sensitive.

This implement comes closest to being a whip. That’s partly because the lashes are hard like a whip’s tail or tails. 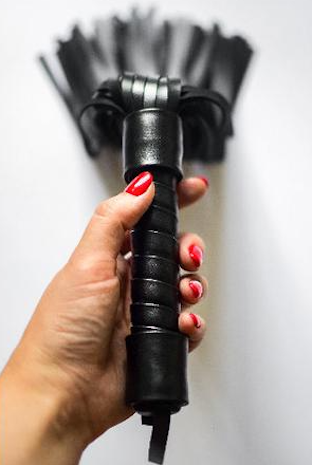 So this implement is best in a relationship where the submissive partner likes more pain than most, and where there is a D/s or M/s relationship.

The advantage is that it’s easy to use and aim, and though it delivers the right kind of pain, very effectively, it’s unlikely to draw blood or do any harm unless the person wielding it behaves like an absolute maniac.

The disadvantage of the flogger with hard lashes is simply that it may hurt the submissive more than she or he likes. The Dom/me has to take care and make sure the submissive is feeling sexy and happy. And that may be easier with a soft lashed flogger.

The feedback I’ve had from submissive I’ve flogged using this kind of instrument is that it hurts, of course. A hard flogging will leave redness and sometimes small welts that will last a few days.

Other submissive reported that the impacts were too intense to be enjoyable as they happened, but that the glowing heat and the sense of having been genuinely punished was worth it. In short, they didn’t enjoy the flogging, but they loved having been flogged.

This implement definitely has its place, but it should be used carefully.

The soft lashed flogger is probably the flogger I would take with me on a one-implement mission. It tends to be popular with submissives. It delivers thud more than sting, and that seems to be the ideal mix in impact play. For most people. 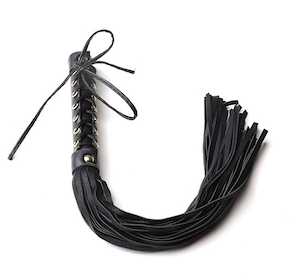 Like the hard-lashed flogger, it’s easy to use and aim. It delivers warm, good-painful sensation, and the blush from a good flogging can last a couple of days. It has to be used extremely hard to get more marking than that.

That’s a useful fact, for submissives who go swimming, gymming and other activities where they have to change in public or leave their upper thighs or lower buttocks exposed.

Everybody has different tastes, even submissives! However, I’ve yet to play with a submissive who likes impact play who doesn’t openly or “secretly” love the soft-lashed flogger. It’s relatively gentle, with a kind of warm comfort mixed with the pain. It can safely be used for a long, long flogging while the submissive drifts off to that floaty space where submissives may go.

Though if the Dom/me wants it can be used harder and more punishingly. I like to give a “reminder” stroke every so often, in the middle of a flogging, so the submissive doesn’t feel that their flogging is predictable or within their control.

Disadvantages? At the moment I can’t think of one. I suppose you’d choose something else if you were going for an intense “real punishment” scenario.

So if I were going to visit a submissive, especially one who is new to “discipline”, and I could bring only one implement, the soft-lashed flogger is the one I’d bring.

This small flogger isn’t one you can usefully use for whole body punishment, unless you have a lot of time on your hands. It’s for flogging erogenous zones, essentially.

Its big advantage is sexual intimacy: you use it at close quarters, to flog your partner’s cock or cunt, their perineum and the sensitive skin between the lower buttocks. And you use it on nipples. 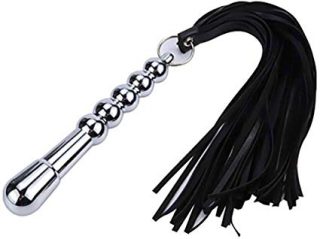 Generally I like natural fibres best, and my choice for the two larger floggers reviewed above is leather.

However, I’ve found that for this smaller implement silicon lashes are better. They can be heavier than leather, so that a small implement with short lashes can deliver a satisfactory thud. Silicon also allows for finer lashes than you can usefully get with leather strips. And finally, it’s easier to clean. Do these little floggers have a place in a Dom/me’s toolkit? Yes.

When shopping you should look carefully at the way it’s made. Personally I’ve never had or handled a flogger that wasn’t well made. Standards are high. Still, check before you buy. The handle should be solid, and reasonably weighty.

Some makers produce floggers with quite wide lashes. It’s a matter of taste, but I prefer lashes to be fairly narrow. Maybe a little over a centimetre for a soft lash, a little under a centimetre for a hard lash. But your taste may vary. A shop should allow you to have a practice swing or two, so you get the one that feels right to you.

Colour is up to you. I prefer the traditional black, though I once bought a pink one, because the intended recipient was a very girlie girl, and though she liked discipline she liked to feel it came with sparkles and a bow. Anyway, colour is up to you.

Happy flogging! Or being flogged!

5 thoughts on “Kink of the Week: Thoughts on Flogging”