“Yes, because you joined that gang. You took part in some horrible things. And you started some of them, like that old guy you mentioned. The poor bastard who got bottled.”

Raylene made an unhappy sound. That was the thing that she felt worst about. When she’d first joined the skinheads, still fucked up and still angry with her mother, she’d egged on the gang to bash an old man. They’d called him a Jew, though Raylene wasn’t sure that he was. Not that it mattered.

I said, “You’ll have to apologise to him. In person.”

Raylene wriggled uncomfortably. She was trying to nod her head, and she couldn’t do that from her awkward position, presenting herself on the stairs. She said, “Yes, I know. I should. But I’ll need you to make me. Sir.” 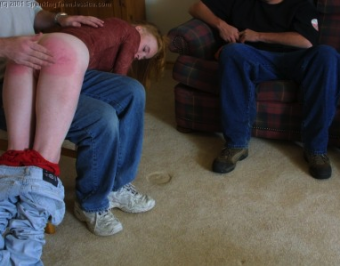 Can I get a witness? It seemed that Raylene would quite like one.

“Maybe I’ll let him watch me punish you. After you’re said sorry.”

Raylene sighed. No, it was a moan. That idea had struck hard, and she’d liked it, at least in part. I didn’t really know if I’d punish her in front of an old man, but the threat had pleased and excited her. Whatever I decided to do when the time came for her to apologise, that had to be useful information.

Her atonement would take a long series of punishments, and good deeds. We’d have to talk about it first, but the idea of a long-term project with Raylene seemed incredibly hot.

I touched the flat of the razor strop to Raylene’s cunt. She jerked forward and then relaxed. I pressed it a little harder, then took it away. There was a wet smear along the centre of the leather. I smiled, not that she could see me. But I made my voice warm when I said, “Good girl. I like it when you’re happy.”

I held the leather in front of her eyes, so she could see where she’d made it wet. “It’s just like a kiss,” I said. “Your cunt kissing the strop.”

Raylene made a smug, animal sound. Like a rat, warm and safe inside a nest of shredded newspaper. I touched the glistening leather to her lips. She kissed it, smiling.

I put my hand on her hip to steady her, letting the strop fall against her right thigh so she could feel its weight. A muscle in that thigh twitched, but she was silent.

4 thoughts on “Humiliation of an ex-Nazi submissive 41”