I also wondered if I’d been unreasonable. I’d felt that it was right to punish Raylene, and I’d acted on it. But being called sir wasn’t usually something I insisted on. I supposed it was that I’d given that order, and then warned her. She’d given me authority, and so she had to take it seriously. 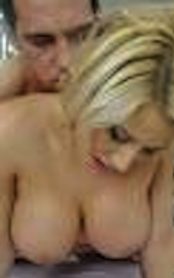 I said, “That’s better, girl.” I leaned forward, over her shoulder so she could see my face. “And look, you won’t always have to call me sir. Not with everything you ever say. But for now it’s good practice, and I’ll give you double if you miss again.”

“Yes. And if I have to remind you again after that… Well, you do the math.”

I watched her thinking, and her face fall a little, when she imagined getting four strokes like the stinger she’d just had. “I see. Sir. Oh god.”

“When I tell you to do something, I want you to do as you’re told. I think you’ll remember now. Don’t you?”

I kissed her, and we paid attention to nothing but the kiss for a minute or so. When we separated I had my hand, the one holding the strop, resting on her ass, and she was smiling.

I said, “This is all new, love, and I know you’re trying to be good. I’m going to help you learn to do as you’re told. Sometimes that’ll hurt. But you’ll learn.”

Raylene nodded. I suspected that this was comedy, and that we both thought so. But we were prepared to be solemn about it. “I understand that, sir. I am trying, sir.”

So I’d convinced her, at least, that I was being reasonable. Perhaps I was. “You’re a good girl, love, and I do know it. Now give me your clothes.” 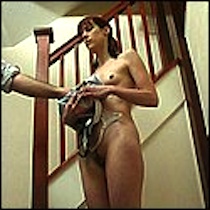 Raylene was still holding her jeans, panties and jersey, all she had been wearing, in a tight bundle against her breasts. It had become her security.

She looked at my face, but I wasn’t smiling at her. The tension felt good, and I didn’t want to dissipate it.

I took the ball of clothes in my hands, but Raylene resisted, holding them back. Then she realised what she was doing. She took her hands away as if the bundle had turned into a hot brick.

Now I did smile at her. It may not have been reassuring.