Over tea and Drambuie Raylene asked me about my writing, and said she wouldn’t mind some writing lessons. Just some guidelines on how to get started. She’d always wanted to write, and now she had something to write about, hadn’t she?

So the atmosphere had changed. It wasn’t reporting any longer. We were talking to find out if we were going to go to bed together. So I offered her my six-part writing course, and she grinned cynically, knowing that there was no such course, but pleased that I wanted to be a regular visitor.

She was impressed by writers – I wish I could say that was common in the people I know – and there was a good chance she wanted to fuck this one. Maybe she thought it would make it easier to talk about the things she had to tell me. Maybe I had a nice smile.

Maybe the fling I’d had with her sister a couple of years ago had made her feel competitive; sisters sometimes rummage through each other’s ex-boyfriends. Also current boyfriends, which is less harmless, but luckily that wasn’t an issue here.

It was surprising, but I was intrigued about where it would go. Anyway, I wanted to fuck her, too. Most of my girlfriends were anarchists, or at least mildly left-wing. Raylene was in a completely different category. Lust builds some interesting bridges. 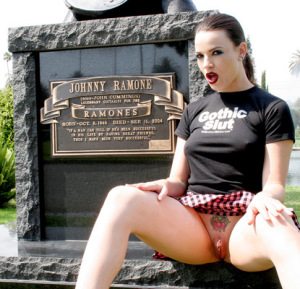 That isn’t where the tat was. But I love this pic for its fitting homage to Johnny, and because that Suicide Girl is in various ways very like the real “Raylene”.

She topped up my Drambuie, and said that while she was with the gang she’d got a tattoo. Would I like to see it?

I don’t actually like tattoos. Personally, I’m hoping the fashion goes away. But “tattoos associated with fringe political movements” is exactly the sort of thing I get interested in.

She was still on her side of the table, and she stood up and pulled the front of the jersey up.

And we’re well launched on this story, now, aren’t we? So I’ll stop here.