I’m in Dublin. I had an idea, after my father died earlier this year, that I should go to Ireland, to see where I came from, at least genetically. 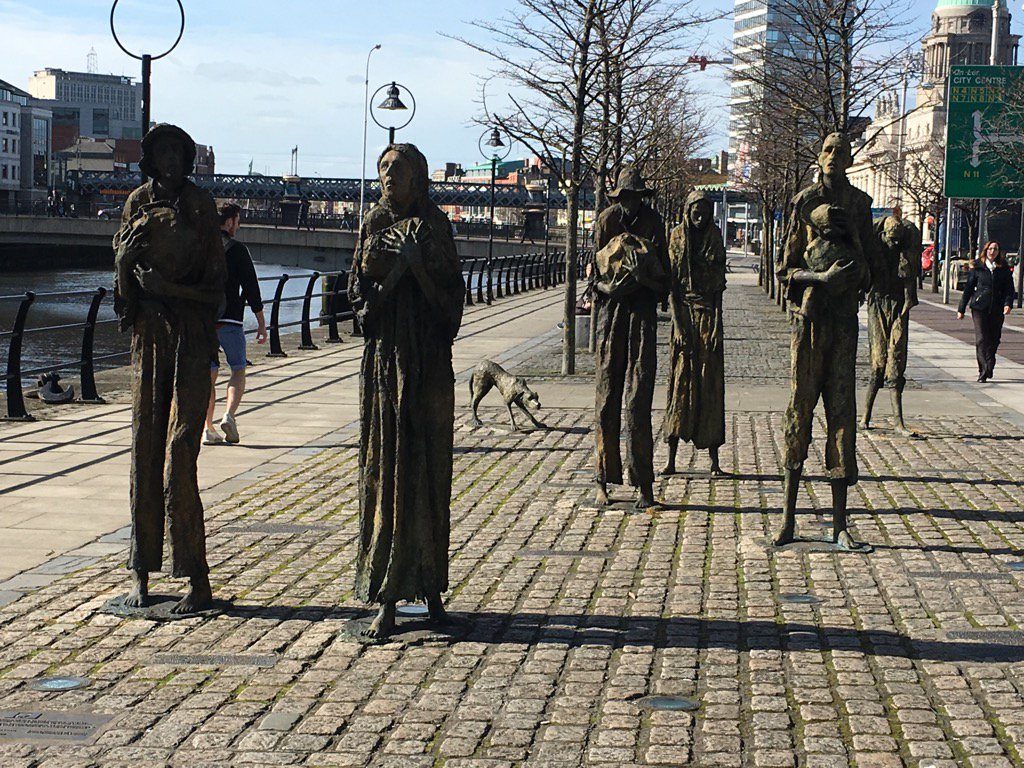 Statues commemorating the Irish Potato Fame. The starving, beside the Liffey, in Dublin

Both of my parents were of almost entirely Irish stock. Though the people who were my ancestors left Ireland during or shortly after the Famine, they continued to marry other Irish expatriots over the next several generations. Although there’s the occasional Welshman or Scot in my traceable ancestry, it’s basically all Irish men and women.

I’ve always been grateful to my ancestors for leaving. Ireland is still disfigured by the Catholic Church, essentially a corporation for the enabling and protection of child rapists, and for the torture and enslavement of women, the Magdalene Laundires episode being only one example of this.

I’d been in Dublin for about six minutes when I encountered a march of young women demonstrating for the repeal of Ireland’s stupid, cruel and life-threatening ban on abortion.

I make a lousy nationalist. If I’d been living in Northern Ireland during the Troubles, I’d always have voted to be part of the United Kingdom. Not out of nationalism: I’d don’t give a fuck what Cromwell did to the Irish three hundred-odd years ago. Or the Elizabethans before that. (Both sides seem to have forgotten the Scots invasion, and the land theft, famine and massacres under Robert the Bruce’s brother Edward, because that doesn’t fit the narrative.)

I’d have voted to be in the UK because I didn’t want to have the cops, directed by the church, tell me what I’m allowed to buy in a bookshop. I’d have wanted to be able to buy contraception, which you could then do in the UK but not Eire. I’d want a woman to be able to get an abortion if she has an unwanted pregnancy. Fuck nationalism: I only care about human rights.

So it was sobering to be reminded that Eire’s abortion law is still the one dictated by the Church. Rapists, torturers, murderers and their enablers, still claiming moral authority. Sooner that’s dumped into history’s Dead Joke Box the better.

Anyway, the pain I cause is consensual, intended to help, to lead to pleasure and other kinds of growth, and never to cause harm. Ireland is full of the traces of the domination of an organisation that seeks no consent, and is entirely indifferent to the pain, suffering, harm and death it causes.

By the way, I’m thinking about pain because after Eroticon, and after seeing Gretel off on the place back to her native land, I went to Dublin and got a cold. My head hurts. Really hurts. My bones feel like I’ve been beaten up, apparently in my sleep, by the secret police. I need to cough all the time, and it hurts like hell to cough. I’ve got chills. God, I’d love a hot flush.

On the other hand, I’m outside a pub on Talbot Street, drinking coke and watching pretty girls go by. So … silver linings, that’s what you have to look out for.

1 thought on “Dublin and pain”