There’s a wig in a drawer, in a box like a humidor, in one of Britain’s most prestigious educational institutions. I’m not going to say which one, because it’s officially “lost”, St Andrews claims ownership (but not “possession”; they don’t have it), and I don’t want to get anyone into trouble. 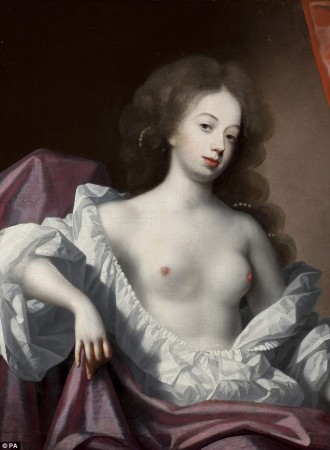 The wonderful and absurdly pretty Nell Gwyn. Pubic hair not shown. Google her name and the words “Protestant whore” to find out why the London mob loved her. It’s a good story – she was, famously, witty as well as pretty – but unfortunately it’s way off-topic for this post.

The wig is made of the pubic hair of the mistresses of his Majesty Charles II, the Merrie Monarch. That means there are, or should be, contributions from the unpopular Louise Renée de Penancoët de Kérouaille, Duchess of Portsmouth (the Catholic whore, as the mob called her), Barbara Palmer, Elizabeth Killagrew, Lucy Walter, Winifred Wells, the sportingly named Catherine Pegge, Moll Davis and Hortense Mancini, and the legendary Nell Gwyn, his Majesty’s Protestant whore.

I’d hoped it would be a sleek, multicoloured wig, with blonde curls, black curls and Nell Gwyn’s auburn, but time has worked the wrong kind of magic. It’s a dry and far from sleek object, and the colours have faded to a uniform dark-grey mouse color.

There’s been a major pubic deforestation program going on. Here are the Australian figures.

This is a fashion, obviously. There’s likely to be a backlash and a return of pubic hair some time. But it’s interesting to see that pubic grooming has become prevalent with younger men, when it used to be more or less exclusively a female thing. The majority of  guys 16-19 have trimmed or shaved or whatever, while for guys in their 20s it’s a fifty fifty chance either way. That’s kind of remarkable.

Disclosure: I don’t shave. But I trim.

I took a sneak peek at the data on this, so I know the answer. Have a guess!