It was also possible that Raylene knew that her tattoo was a Nazi symbol in various European countries, but for me to talk about it would make her feel terrible. She didn’t want to be associated with Nazi moronism any more but there wouldn’t be much she could do about it until she had money for a repair. In the meantime I decided that it should just mean whatever she said it meant.

Raylene let the jersey fall back, bringing the curtain down. It was remarkable just how bad that made me feel. But then she walked around the table, and, when I turned my chair round, away from the table, she stood in front of me, very close. She lifted the curtain again, arching her belly forward for me. She expected me to like what I saw, and I did. 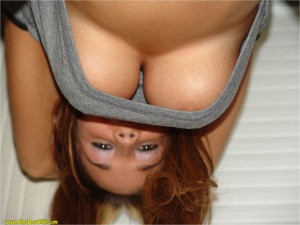 But time was passing, again, and I should be focussed. I said, “Raylene, that is so absolutely fucking gorgeous,” not meaning the tattoo, and not expecting Raylene to think that I did.

I put my hands on Raylene’s hips and pulled her closer and kissed her belly, with slow, appreciative kisses, soft and dry.

Raylene said, “ninn, yah,” more or less, in response to having her tummy kissed, and let the jersey fall, with my head under it so that I was in that warm-bread-woman space with her belly and her ribcage and her breasts above me. Inside that jersey she was speckled with light from the interstices in the knitting; they were pale and pleasingly weighty though firm, observed from below.

And I moved my hands down from her hips to hold her buttocks, and with that we had declared ourselves. Not only had we established that we were going to fuck, but we had already started.