Let’s get back to the Raylene story. The story so far is that a while back I interviewed Raylene, the younger half-sister of a woman I knew, for a story I was writing on gang violence. Raylene had spent a year with a neo-Nazi gang. She’d been in a bad state when she joined. Her main aim had been to hurt her mother, which she did.

But when her brain and conscience came back on line she’ got out. She was back staying with her mother until she got a job and a new place to live and generally sorted herself out.

We talked at the kitchen table, but although it started as a magazine interview we soon found ourselves talking about personal stuff that I couldn’t use in the story. I realised that I liked her, because even though some of the things she told me about were horrible, she knew she’d fucked up. She was honest about what she’d done and why, and she was brave, smart and funny.

And then, over a cup of tea we moved from liking each other to wanting to fuck.

And while we were starting to get sexual, I discovered that Raylene rather liked being told what to do. And then, because I pushed a little, that she rather liked being smacked if she didn’t obey quickly enough. And Raylene made her own, reciprocal discoveries about me. So we knew not only that we were about to fuck, but the kind of sex that we were going to have.

That process of recognising each other, and deciding to proceed, took quite a while, it seemed. Although in another sense it all happened very quickly. 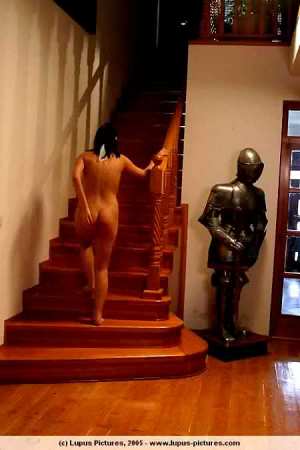 I’d left off the story at the point where Raylene was glowing rather beautifully from having had her breasts smacked with a ruler, and her bottom smacked and her pussy stroked with my hand. It was time for her to lead the way to her bedroom. She held her clothes in a bundle, and was biting on an old razor strop that her mother had bought (as an antique, not for sexual purposes). I smacked her bottom, to set her walking.

I collected my laptop from the table. It was supposed to record a story on gangs, and had instead recorded something much more interesting. It shouldn’t be left lying around. And I followed Raylene, watching her.

She was a strong girl, in a feminine way. Her bottom would normally glow palely in contrast to tanned skin, but at this moment she was pinkly splotched from my hand.

I watched the crease and uncrease of buttock and thigh, left, then right, as she walked. I could watch that all day.