So there we were. Raylene is standing in a kitchen, jeans around her knees, and naked from the knees up; hands on head, having just fetched a ruler and presented it to me. And I have accepted the ruler and tapped it against Raylene’s left breast, just below the nipple. And drawn the ruler back.

You readers, after sixteen instalments of this story, must feel like you’ve spent most of your life in this damn kitchen. But to Raylene and me time was moving at roller coaster speed. We’d known each other for about two and a half hours, at the moment I tapped that ruler to the underside of her left breast.

Raylene watched me carefully. I was a man with a smile and a ruler in his hand, and that’s a man worth keeping an eye on. She was intent, concentrating on the moments as they came, not smiling but not afraid, either. The drama appealed to both of us.

I said, “keep still, girl,” and swung the ruler forward, controlled so that it landed firmly but not hard across the rounded underside of her breast, an inch below her nipple.

The ruler was a thin strip of untreated, dried-out pine, as light and as flimsy as balsa wood. The breast spanking was the only thing to do with it that would not be ridiculously anticlimactic; if I smacked it across her bottom it’d only snap. 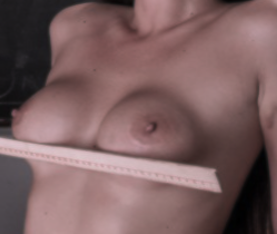 Together we heard the light “smik” of the ruler’s impact, soft pine on softer womanhood. And Raylene said, “Errn!” There was surprise rather than pain in that sound. She’d expected it to hurt more than that.

I watched the area where it had landed, but there was only the faintest pinkish band. The undersides of her breasts remained mostly milkwhite, and her nipples the rubber-pink colour of dried paw-paw.

I said, “That’s a good girl.” Because I thought saying that, in those circumstances, might make her uneasy.

I touched the nub of her left nipple with the ruler’s end, and pushed it a little. “But we’ll go a little harder, now, don’t you think?”

Raylene stared at me with some disbelief.