So there Raylene was, jeans and knickers – all she was wearing – bunched a little above her knees, rummaging obediently through the kitchen drawers, looking for a wooden spoon or something for me to beat her with.

I watched her with admiration, partly because she had a splendid body, slightly plump but strong, fit and firm, and as she pulled out drawers and inspected the contents, the movements of her rather heavy breasts were a wonder and a marvel.

I also admired the prints my hand had left on her right buttock, where I’d smacked her, twice, before sending her on this search. A red, multi-fingered splotch on nicely pale, rounded skin. The handprints looked particularly enticing at this moment, as Raylene bent to inspect a lower drawer. She had to shuffle a bit, since her jeans made her movements a little, enjoyably, awkward.

And the last reason for my admiration was that I’d seen her hesitate, for a moment, when she’d opened the second drawer, the one below the cutlery drawer. She’d taken care that whatever it was that she’d seen in there stayed out of my visual range. For the last couple of minutes she’d been searching for something else, something that wouldn’t sting quite as much.

I liked that. It meant that she’d accepted my authority over her, temporary and purely exual though it was, quite deeply. After all, she could simply have taken the thing out, whatever it was, and said, “Well, there’s this, but I’m not letting you come anywhere near me with that thing. Buster.” 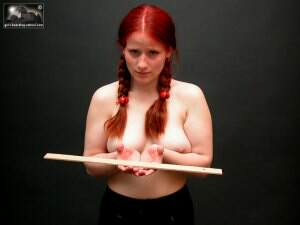 That would have been fine. It was up to her, after all. But she didn’t want to do that; she preferred to submit to my judgment, and to try to get away with mild naughtiness within that submissive framework. I liked that.

And I liked the fact that, having given me this much power, she still had the courage to take risks.

Raylene straightened from the bottom drawer, holding a foot-long ruler. It was a flimsy, pine thing, unlikely to raise much of a sting, and likely to break if it was used with any firmness at all. She swivelled on jeans-encumbered legs and held it out to me on her upturned palms, the ruler level with her nipples.