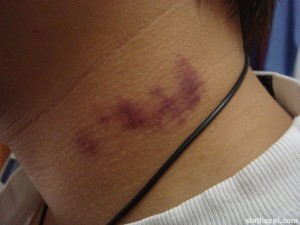 But she didn’t step back. I still had her cunt wet and warm around my fingers, her arms around me, and my left hand comfortably on her arse. She was still leaning in against me, her head against my shoulder. She snuggled in closer, or I thought that was what she was doing until she bit my neck, hard enough for it to hurt – hurt a lot, though I tried not to react.

She said, “you fucking bastard.”

That hurt too, though that may seem odd. I hadn’t meant to be a bastard, though I’d certainly pushed my luck. So I wondered if she was right, which she might well be. And then I forgot that question, because Raylene put her arms up.

Not in the way a child raises his or her arms to cooperate with having their jersey pulled off. Raylene’s gesture was more like a captured soldier in an old war film. She held her arms straight up, palms upwards. A show of surrender, that was partly comic, but also real.

Raylene was being obedient. Not by accident. Not ambiguously. This time she looked at me. Her belly showed palely, as the jersey’s hem was lifted by her arms. I still had my fingers in her cunt. Her face was expressionless, carefully so.

In a sense rather wider than I’d asked, she’d surrendered. I wondered if she’d bitten me so that I’d punish her for it. But her motives didn’t matter any more. Raylene waited.