[This is part 8 of a serial. It’s really an elongated anecdote, since it’s true except for the odd detail being changed to protect the identity of a woman whose name is not really Raylene. And the story started in a kitchen and here in episode 8 we’re still in the kitchen. Nothing’s happened, really. Or nothing except that Raylene had given me some ambiguous signals about submission, displayed interest and then denied it, and had at least given me certain other kinds of permission. As Episode 8 begins, we are standing together, face to face, and Raylene’s jeans and panties are down around her thighs and I’m firmly holding her ass, a buttock in each hand. So we’re both happy. Now read on.] 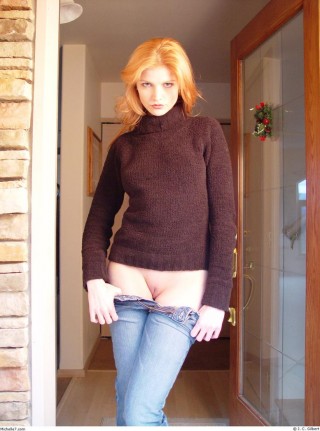 Since having my hands squeezing her bottom made Raylene sigh, I slipped my right hand down a little further, around cool rounded flesh, and accessed and stroked her cunt from behind. That made her sigh too. Raylene held her breath, expecting more. So I made there be more, and more.

My fingertips were wet, then wet past the knuckles, then three fingers wet and in her all the way. I kissed her ear again, and she leant closer and said, “Yes.” Yes is what I thought, too. It’s not so hard to be happy.

Time passed, and while I stroked her I considered what had to be done next, if this was going to end, as it should, in her room and on her bed, table or possibly carpet. We had to move this into private space, since Raylene had sisters who also lived in this house. And although they were supposed to be renovating a house in the country, there were also her mother and her mother’s boyfriend to consider. It seemed to me that the way to move this situation to her bedroom, which I assumed was upstairs, was to get her to take her jersey off. She would then realise that we were irrevocably intimate, and invite me upstairs.

This actually was a reasonable plan, though my desire to get my hands and mouth on her breasts helped me to think of it. And because I am stupid and do not learn, and under some circumstances I do not think at all, I said, as encouragingly as I could, “arms up now.”

Raylene frowned and looked at me. I had only meant this as a mock-order, the sort of thing I might say I were putting one of my nieces or nephews to bed: Arms up, because you have to lift up your arms so I can help you off with your jersey.

But in this context I seemed to be pulling “that stuff” again; giving her orders after she’d said that she didn’t want orders. The frown meant that I’d been told not to do this dominance stuff, and here I was again, and what did I think I was doing and who the hell did I think I was?

My first impulse was to apologise. I don’t like making women frown. Though perhaps I should only apologise mildly, since it was a pretty mild transgression.