I said, “Keep your mouth open. This is going to hurt, and I want to hear you.” I liked saying that. It sounded cruel, and I expected that Raylene would find it exciting. It paid attention to her, close and detailed attention. 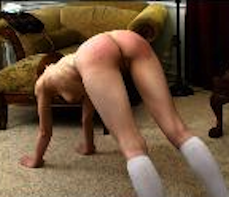 Raylene opened wide, as though she was at the dentist. Her face had reddened a little more, because of her own obedience. But her ass was redder still.

I took another moment to admire her, that sweetly curved bottom, muscular and womanly, and red, splotched with stripes of an even deeper red. I liked her body more the longer we spent together.

Then I swung the strop, aiming for her underbum, just above the crease of her thighs. She was startled, but she was almost silent, though she was breathing hard.

So I made the next four a little harder, and delivered them fast. Raylene’s ass and thighs shook with the effort of keeping still, and she moaned, a long, low note: “Oh-wo-wo-wo-wo-wo-wo”. It sounded like “woe” to me, though I doubt if she was making words. 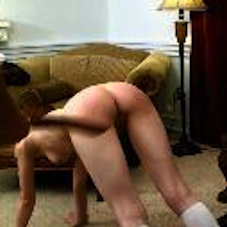 I left a pause, so that if she wanted she could say she couldn’t take it, and make me reassure her that she could. But Raylene had no protest to make, not even an insincere one.

She stilled herself, getting her hips under control. She arched her ass up, in the hottest and best invitation of all, and waited.

She was breathtaking, in that position. I took a breath. I let her watch me raise the strop over my shoulder.

26 thoughts on “Humiliation of an ex-Nazi submissive 52:”