So I’d told Raylene to fetch the implement she’d found, but tried to keep hidden from me, in a drawer in her mother’s kitchen.

And Raylene said, “Yes Sir,” because she wanted to show that she could be obedient, at least if I was watching her carefully. And, knowing I would be watching most carefully, she wiggled her arse at me while she rummaged through the drawer.

She turned around, jeans around her ankles now, holding a strip of thick leather, about two feet long. There was a short handle of slightly thicker leather at one end, leaving a leather blade of about 18 inches. It looked old. The leather seemed very stiff and dry.

At first I thought it was a tawse, or perhaps an old school strap. Then Raylene held it up for me, as she had with the ruler, across her upturned palms, level with her nipples.

I recognised it as something terribly traditional: an old razor strop.

You used razor strops to sharpen cut-throat razors, but if you didn’t have one of those, then you might use it to whip somebody’s nubile arse. It was good for both. “Good god.” I’d read about razor strops but I’d never actually seen one until that moment. “I mean, good girl. Now bring it here.”

Raylene shuffled and hopped forward, with the strop still balanced on her upturned hands. When she stopped in front of me, and her breasts had settled, I took it from her. Raylene watched me warily as I folded it double, looked at her, and smacked my own palm lightly. It was heavy leather, and hard. 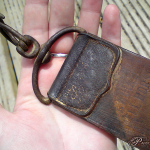 Raylene winced as the leather smacked on my palm, and I looked at her thoughtfully. I had, after all, promised that I would punish her.

She’d be thinking that this would certainly do that. But perhaps it was a ittle more scary than she would like. On the other hand, I wanted to try it, and Raylene was definitely in harm’s way.

I’d have to check whether she was genuinely scared or just excited and wanting to be made to take the plunge. We hadn’t talked about limits.

But first, I was puzzled. “What’s this doing here?”